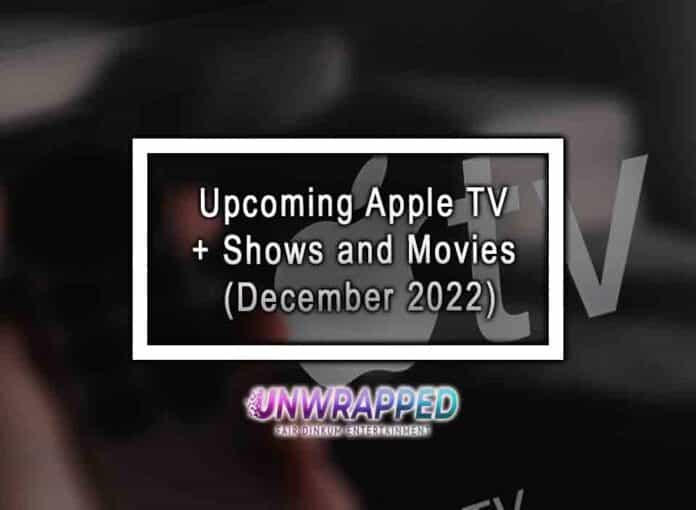 Since Apple TV+ has been available for a while, the fantastic streaming service has amassed a wonderful library of original content, including movies and TV episodes. We keep tabs on new releases coming to the preferred streaming service every month. In this post we will acknowledge upcoming apple tv+ shows and movies.

In 2022, Antoine Fuqua and William N. Collage will release Emancipation, an American historical action thriller. Will Smith and Ben Foster play the leads? The premiere of Emancipation took place on October 1, 2022, in Washington, DC. The potential film will be distributed in select theaters on December 2, 2022, followed by its streaming release on December 9, 2022, by Apple TV+.

Based on Mick Herron’s “Slough House” novels, Slow Horses is an action-packed spy drama. When British MI5 officer River Cartwright fails a training operation and becomes a public embarrassment, he is sent to Slough House, an administrative hell for those rejected from the service.

Apple TV+ created the Little America TV series as an American anthology show. The premiere was on January 17, 2020. In December 2019, well before the show’s scheduled launch, it was renewed for one second season. The second season’s launch date is slated for December 9, 2022, with eight episodes in total.

American musical comedy film Spirited, directed by Sean Anders and written by Anders and John Morris, is scheduled for release in 2022. The film is an updated adaptation of Charles Dickens’s A Christmas Carol, first published in 1843, and stars Will Ferrell, Ryan Reynolds, and Patrick Page.

Scientist Amber Chesborough is in peril in “Echo 3,” which takes place in South America amid a covert conflict. Her ex-husband Prince and his brother Bambi, both formerly serving in the military and with their baggage, must rescue her after she goes missing. The third season of Echo, developed by Mark Boal, winner of two Academy Awards, will debut on Apple TV+ on November 23, 2022.

American director Alfred Hitchcock’s 1945 psychological thriller Spellbound stars Ingrid Bergman, Gregory Peck, and Michael Chekhov. It centers on a psychoanalyst who develops feelings for the new hospital director in Vermont, where she works, only to learn that he is a fraud with dissociative amnesia who may also be a murderer. Inspired by Hilary Saint George Saunders and John Palmer’s The House of Dr. Edwardes, published in 1927.

David Ezra Stein and Candlewick Press released their children’s picture book Interrupting Chicken in 2010. The 2011 Caldecott Honor book, Interrupting Chicken, was also a New York Times bestseller. Two sequels, On November 18, 2022, Apple TV+ will debut an animated series based on the novel. Sterling K. Brown, who voices Papa in the series, will provide his voice to the role. On December 2, 2022, a Christmas special will be released to the public.

The first season of the adult animated musical comedy series launched on AppleTV+ in May 2020, and it was an insant sensation. The first 3 episodes of Central Park Season 2 were made available on Apple TV+ on June 25, 2021, and the potential show has since been renewed for a third season. Nominated for an Emmy, the show’s creators and executive producers are Nora Smith, Josh Gad, and Loren Bouchard.

Comedic series Mythic Quest premieres in 2020 from the minds of It’s Always Sunny in Philadelphia. The story revolves around a fictional video game studio trying to grow and improve its product while keeping the peace among its employees. While office comedies have seen better days, Mythic Quest gives the genre a much-needed jolt by setting the action in a mythical world.

Based on the book How to Be a Latin Lover, the Spanish-language and English-language TV series Acapulco was produced by Austin Winsberg, Eduardo Cisneros, and Jason Shuman (2017). On October 8, 2021, the series debuted on Apple TV+. The potential show was picked up for a second season in March 2022, and the new episodes debuted on October 21.

The Best Shows On Flash December 2022

Must Watch Anime Shows on Funimation In December 2022