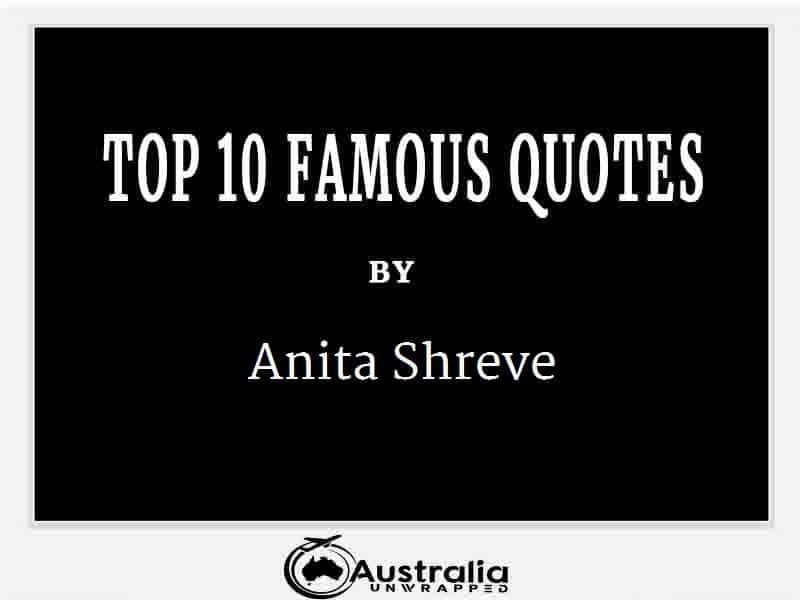 Quotes, who doesn’t love a good quote? This series of articles we look at Top 10 Famous Quotes by Author Anita Shreve, author quotes are always a challenge and fun to pick, with Anita Shreve you will find my Ten favourites of Anita Shreve’s quotes.

“To leave, after all, was not the same as being left.”
― Anita Shreve, The Pilot’s Wife

“A person walks into a room and says hello, and your life takes a course for which you are not prepared. It’s a tiny moment (almost-but not quite-unremarkable), the beginning of a hundred thousand tiny moments and some larger ones.”
― Anita Shreve, Eden Close

“Sometimes I think that if it were possible to tell a story often enough to make the hurt ease up, to make the words slide down my arms and away from me like water, I would tell that story a thousand times.”
― Anita Shreve, The Weight of Water

“Love is not simply the sum of sweet greetings and wrenching partings and kisses and embraces, but is made up more of the memory of what has happened and the imagining of what is to come.”
― Anita Shreve, Fortune’s Rocks

“And so a person can never promise to love someone forever because you never know what might come up, what terrible thing the person you love might do.”
― Anita Shreve, Testimony

“Sometimes, she thought, courage was simply a matter of putting one foot in front of another and not stopping.”
― Anita Shreve, The Pilot’s Wife

“I thought about how one tiny decision can change a life. A decision that takes only a split second to make.”
― Anita Shreve, Light on Snow

“There are more experiences in life than you’d think for which there are no words.”
― Anita Shreve

“To be relieved of love, she thought, was to give up a terrible burden.”
― Anita Shreve, The Pilot’s Wife

“If you’re skating on thin ice, you might as well dance.”
― Anita Shreve, Where or When

“The things that don’t happen to us that we’ll never know didn’t happen to us. The nonstories. The extra minute to find the briefcase that makes you late to the spot where a tractor trailer mauled another car instead of yours. The woman you didn’t meet because she couldn’t get a taxi to the party you had to leave early from. All of life is a series of nonstories if you look at it that way. We just don’t know what they are.”