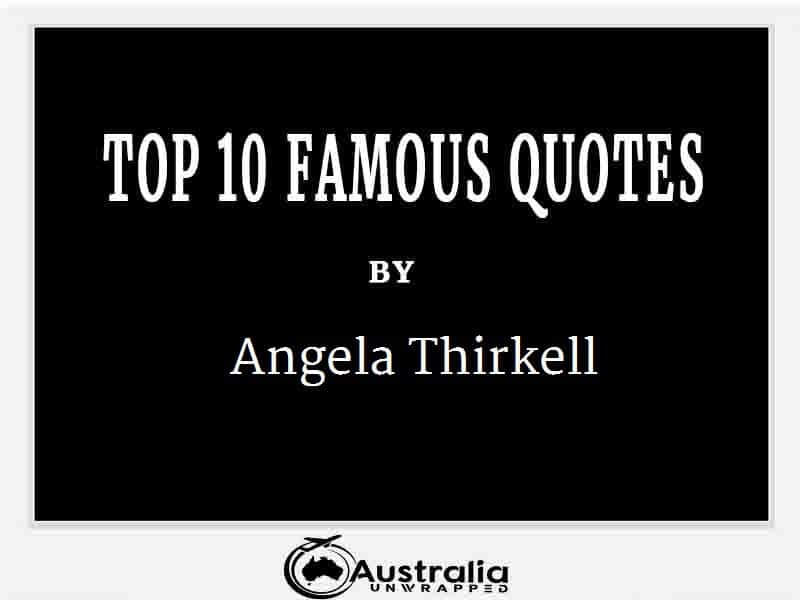 Quotes, who doesn’t love a good quote? This series of articles we look at Top 10 Famous Quotes by Author Angela Thirkell, author quotes are always a challenge and fun to pick, with Angela Thirkell you will find my Ten favourites of Angela Thirkell’s quotes.

“Like most healthy men he thought that any illness was death”
― Angela Thirkell, Wild Strawberries

“Henry, you mustn’t mind. It is really a kindness to have him.’ ‘Well, I do mind, Emily,’ said Mr Leslie, getting up. ‘Kindness is one thing and your family is another. You treat this house as if it were the Ark, Emily, inviting everyone in.’ ‘At least she doesn’t ask them in couples, sir,’ said David. ‘A female Holt would be appalling.’ ‘That’s enough,’ said his father. ‘If Mr Holt comes into this house, I go out of it.’ He took a cigar from the sideboard and went out, almost slamming the door.”
― Angela Thirkell, Wild Strawberries

“I suppose everybody has a mental picture of the days of the week, some seeing them as a circle, some as an endless line, and others again, for all I know, as triangles and cubes. Mine is a wavy line proceeding to infinity, dipping to Wednesday which is the colour of old silver dark with polishing and rising again to a pale gold Sunday. This day has a feeling in my picture of warmth and light breezes and sunshine and afternoons that stretch to infinity and mornings full of far-off bells.”
― Angela Thirkell, Three Houses

“At this moment the headmaster found Master Wesendonck’s tall pile of books slipping from his grasp. He juggled frantically with them for a moment and then, to the infinite joy of the boarders and day boys, they crashed to the ground in all directions. A bevy of form masters rushed forward to the rescue. Master Wesendonck, realising with immense presence of mind that his natural enemies were for once in their proper place, grovelling on the floor, stood still and did nothing.”
― Angela Thirkell, High Rising

“Good,’ said Mr Carton. ‘Why children, a loathsome breed who should be kept under hatches or in monasteries till they have acquired some rudiments of manners and consideration for others, should be encouraged to think themselves of importance now, I do not know. The English as a race have always been sentimental about dogs, and draught horses in Italy where most of them have never been, but this wave of sentiment about children is a new and revolting outburst.”
― Angela Thirkell, The Headmistress

“Perhaps as one gets older one takes one’s joys altruistically,”said John, in turn thinking aloud. “I must say though I sometimes wish I could get it selfishly, just for myself, as Gay used to give me, when I was young.”

Lady Emily found nothing to say. John’s last words fell dead on her heart. It terrified her that he could speak of his youth as a perished thing.”
― Angela Thirkell, Wild Strawberries

“How is Mrs. Rivers doing?’ asked the agent, a very tall and large man, well-dressed, bald and depressing, with a manner of gliding into his office from a side door without perceptibly moving his feet which had struck terror into many young writers and caused them to accept the lowest terms Mr. Hobb could offer.”
― Angela Thirkell

“Now that,” said Mrs. Morland, up in arms for seeing things straight, “is just rubbish. There isn’t any good or bad taste about what books you read: it’s what you like or don’t like.”
― Angela Thirkell, Love at All Ages

“People who say Jane or talk about Janeites revolt me. The sort that can walk with kings and not lose that common touch. ‘Miss Austen to you’ is what I feel inclined to say.”
― Angela Thirkell, August Folly

“I have been very, very happy. Mamma always said that even if there wasn’t any happiness one must try to be happy without it.”
― Angela Thirkell, Love Among the Ruins

“It need hardly be said that the qualities which filled Martin with the pangs of hero-worship were not altogether those which David’s parents would have most desired. If he had had to earn his living, David would have been a serious problem. But, owing to the ill-judged partiality of an aunt, he had been independent for some years. So he lived in town and had hankerings for the stage and the cinema and broadcasting, and every now and then his looks and his easy manners and his independent income landed him in a job, though not for long. And, as Martin had dimly surmised, heaps of girls had been in love with him. When the Leslies wished that David would settle down to a job and stick to it, they never failed to remind each other that the house would not be the same if David were not there so often.”