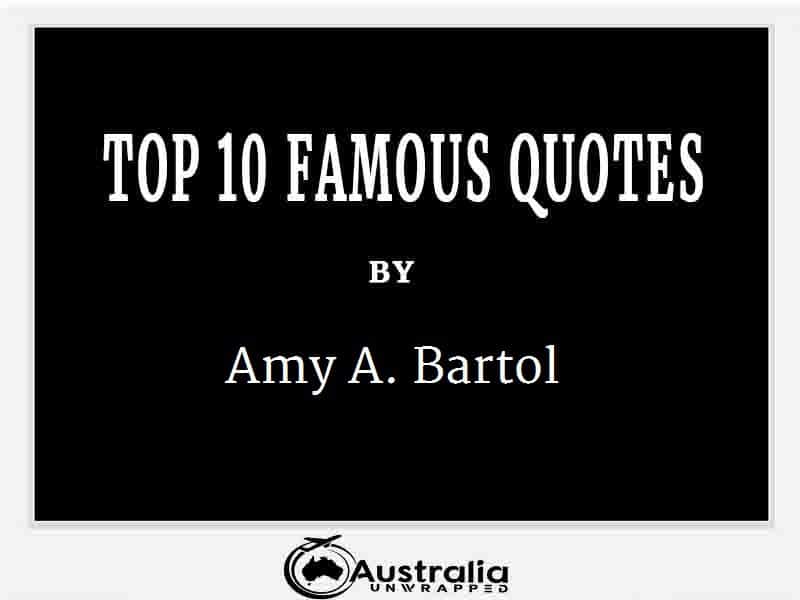 Ten of My Favourite Amy A. Bartol Quotes

Quotes, who doesn’t love a good quote? This series of articles we look at Top 10 Famous Quotes by Author Amy A. Bartol, author quotes are always a challenge and fun to pick, with Amy A. Bartol you will find my Ten favourites of Amy A. Bartol’s quotes.

“Hold onto the string, love, until the current shifts and we can be together again.”
― Amy A. Bartol, Indebted

“I don’t want you going there without me, ever…do you understand what I am saying?” he asks me, searching my face, probably looking for any sign of dissention.
“Let me get this straight, what if I got a craving for…I don’t know…Twinkies in the wee hours of the morning and all that was open was the Seven-Eleven. You’re saying I should wake you up, even if you’re crashed out, just so that you can go with me on a treat run?” I ask skeptically, trying to gauge his level of commitment to this course of action.
“Genevieve, Twinkies are really bad for you, but if you had to have one, then yes, that’s what I’m saying,” he smiles at my scenario. “Do you really like those things?”
“I’m not going to tell you if you’re going to tease me, but I will say that it’s suspiciously inhuman not to enjoy a Hostess snack from time to time,” I reply coyly. “I’ll buy you one. You’ll love it, I promise.”
And I’ll be doing the world a favor at the same time, I think, remembering him without his shirt on.”
― Amy A. Bartol, Inescapable

“I slump against the cushion. “How am I going to protect him, if I’ve completely alienated him? He thinks I’m creepy…” I say sadly.
“You are not creepy,” Reed says soothingly, taking my hand.
“You’re not a good judge of creepy, Reed, since you’re creepier than I am,” I say warily, looking over at Zephyr when I hear him laughing at my comment. “I wouldn’t laugh too hard, pal, because you’re the creepiest one of us all.”
― Amy A. Bartol, Inescapable

“You are afraid of me?” Reed asks me, sounding unpleasantly surprised.
“Of course I’m afraid of you. You’re menacing, you’re overbearing, you’re arrogant, and if you don’t see that, then you can just add high to the list,” I say, using my fingers to tick off his shortcomings.”
― Amy A. Bartol, Inescapable

“Reed lifts his lips from mine, and looking into my eyes, he murmurs, “I want those thousand years with you, Evie, you have no idea how much I want them. I want a thousand years, and then I want a hundred thousand more.”
― Amy A. Bartol, Inescapable

“He isn’t wearing a shirt…. He shouldn’t just walk around like that; it’s obscene to have to look at someone so perfect. He should do the world a favor and eat a donut or two.”
― Amy A. Bartol, Inescapable

“Sometimes, I think I have made you up just to torture myself- and there are other times that I know you must be real because I couldn’t have dreamed such perfection.”
― Amy A. Bartol, Intuition

“…I have never seen him smile like that—it’s intoxicating, especially because I never thought he would smile like that at me.”
― Amy A. Bartol, Inescapable

“You’re what I want. No other angel, or man, will ever stand above you in my esteem, in my regard, or in my love.”
― Amy A. Bartol, Inescapable

“Reed’s face inches closer to mine on the pillow as he says, “Let me try to explain something to you, Evie. All of these years that I have been here, it is as if I have been sleeping. I have to always pretend to be something that I am not—pretend to be human. When I am not pretending to be human, then I am hunting evil, vicious angels who want nothing more than to…” his voice trails off and there is hollowness in his tone that reflects the loneliness of his existence. “But now, I am awake, for the first time in my existence, and not only am I awake, but I feel flames when you are near me. You have changed things for me. There is no reason to pretend around you. If I had to live without you now…now that I know what I have been missing…” The need in his voice makes me want to promise him anything, give him anything, just to fill that void in him. “I cannot go back to sleep, Evie. You are the only thing that makes me want to live. If you leave here, if you ascend to Paradise, or even if you are cast into the abyss, or taken there by the Fallen…I will have to follow you, no matter where you go. Even if I have to pursue you into the dark…if you cease to be, then so will I. You are my sin and my redemption.”