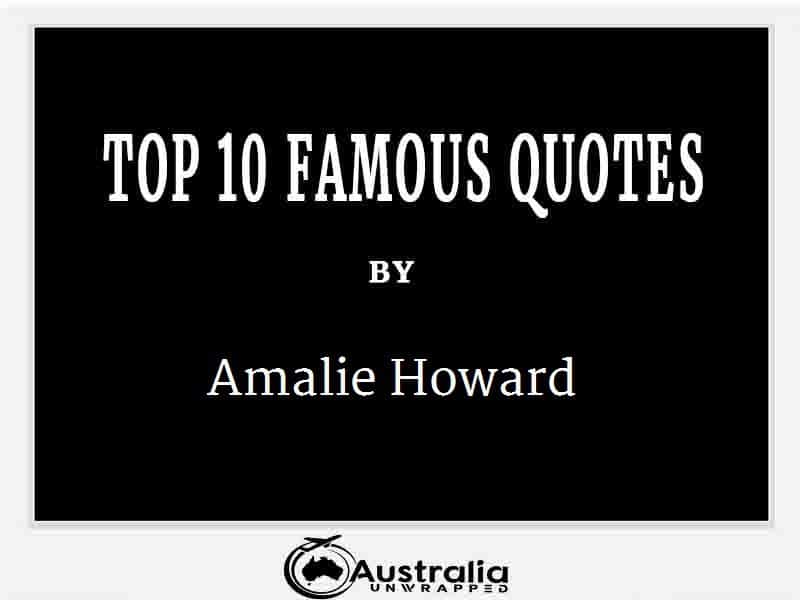 Quotes, who doesn’t love a good quote? This series of articles we look at Top 10 Famous Quotes by Author Amalie Howard, author quotes are always a challenge and fun to pick, with Amalie Howard you will find my Ten favourites of Amalie Howard’s quotes.

“Blood is a fickle thing, but so is truth, which can be bent to suit all purposes.”
― Amalie Howard, Alpha Goddess

“After a while Lucian spoke curiosity evident in his tone.
So why do you care so much Giving in to the temptation of a little forbidden snack ‘ Lucian’s laugh was derisive.
None of your damned business.’
That’s forbidden too in case you forgot. Not that I don’t mind a little witch blood myself from time to time. We always crave the illicit don’t we I just didn’t think my straitlaced uptight brother would indulge in such inclinations.”
― Amalie Howard, Bloodspell

“Don’t be afraid of who you are. You cannot hope to control your power if you do not understand it and who you are. You must protect yourself at all costs even against those you . . . love.’ He hesitated lost for a moment and Victoria felt his thoughts flicker briefly into a strange nothingness before moving back to the consciousness she recognized. His words were hard. ‘Love is a breeding ground for betrayal. Guard against it.”
― Amalie Howard, Bloodspell

“The same beautiful receptionist greeted Christian who had met him before and she extended the same lush invitation as she had the last time. Victoria’s eyes narrowed and Christian chuckled under his breath at her jealousy.”Relax chérie, she’s paid to do that.” “Well, she didn’t come on to me, so obviously she’s not doing her job properly,” Victoria said. Christian laughed.”
― Amalie Howard, Bloodspell

“My father was quiet ‘ she told him. ‘My mother was not. They were polar opposites but you’d think they were a match made in heaven the way he loved her and she him. He’d sit and listen to her play for hours like it was their special language. I miss that the most their music. It made me feel . . . part of something beautiful.”
― Amalie Howard, Bloodspell

“Forgiveness is a choice. You control how you respond to something or someone. You can’t change things that happened in the past, but you can decide how you let them affect you.”
― Amalie Howard, Waterfell

“Don’t let someone else decide who you are. You decide. You are free to make that choice no matter where you’ve come from. Blood does not define you.”
― Amalie Howard, Alpha Goddess

“I already fear for my life just because of who I am, you think adding a little inconsequential vampire to the equation will change any of that?”
― Amalie Howard, Bloodspell

“You don’t have to know where you’re going every step of the way, or the destination. Trust in yourself to do what’s right and what’s needed.”
― Amalie Howard, Oceanborn

“I know what you are, but I also know who you are too. And the ‘who’ is the part that defines us.”
― Amalie Howard, Bloodspell

“Then Christian made the fatal mistake of looking into her eyes. Suddenly he couldn’t move a muscle. They smoldered with a terrible black anger even as her mouth returned his kiss. It was as if they were two separate beings, the sweetness of her mouth upon his, and the darkness of her terrible eyes draining the life out of him. Christian could feel her heart racing, the fury of her blood uncontrollable, and he knew that if she couldn’t rein it in somehow, he would be lost. Already his hunger eviscerated him, he could feel the holes in his gut as those eyes, so blackly terrifying—hers but not hers, sucking everything from him, taking, feeding … killing. He felt wetness on his face.