All About Histrionic Personality Disorder 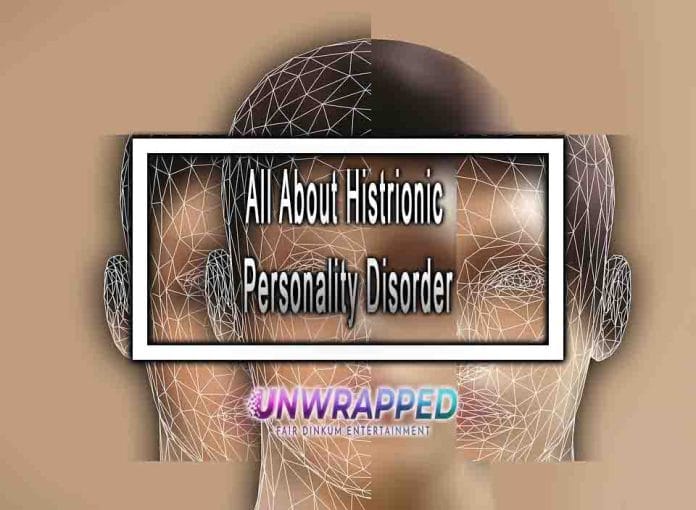 What Really Is A Histrionic Personality Disorder

A psychiatric disease known as a histrionic personality disorder is characterised by stable and unpredictable emotions and mistaken self-perception. Something “dramatic or theatrical” is referred to as “histrionic.”

Self-esteem is focused on other people’s approval rather than a true sense of self-worth in people with a histrionic personality disorder. They need to be noticed and will often act out in dramatic or inappropriate ways to achieve this.

See More: What types of personality disorder are there?

People with a histrionic personality disorder often have strong social skills. Still, they utilize them to manipulate others so that they may be the focus of attention. A person who has this ailment could also:

Although the exact aetiology of histrionic personality disorder is unknown, many mental health specialists feel that both acquired and genetic elements contribute to its emergence. The fact that histrionic personality disorder runs in families, for example, shows that a genetic vulnerability to the condition may be inherited. The kid of a parent with this illness, on the other hand, might just be replicating taught behaviour. Other elements that may be engaged in the environment include: As a youngster, there was no criticism or punishment, positive reinforcement was only provided when a child performed specifically authorised actions, and inconsistent attention was given to a child by their parent(s), all of which can lead to a lack of understanding about what types of behaviour earn parental approval. Personality disorders are often linked to a person’s temperament, psychological patterns, and techniques they acquire to cope with stress as they get older.

Can The Disorder Be Treated?

People with histrionic personality disorder, on the whole, do not feel they require therapy. They also exaggerate their sensations and despise regularity, challenging them to stick to a treatment plan. They may seek therapy if they are distressed by depression, which might be triggered by a loss, broken relationship, or another difficulty caused by their activities.

The most common treatment for histrionic personality disorder is psychotherapy (counselling). The purpose of therapy is to assist the client in identifying the reasons and anxieties that underpin their ideas and actions and teach them how to interact with others more positively. Medication may be used to address other disorders that are present in conjunction with this illness.

You May Also Like: What drinks help to decrease blood pressure?