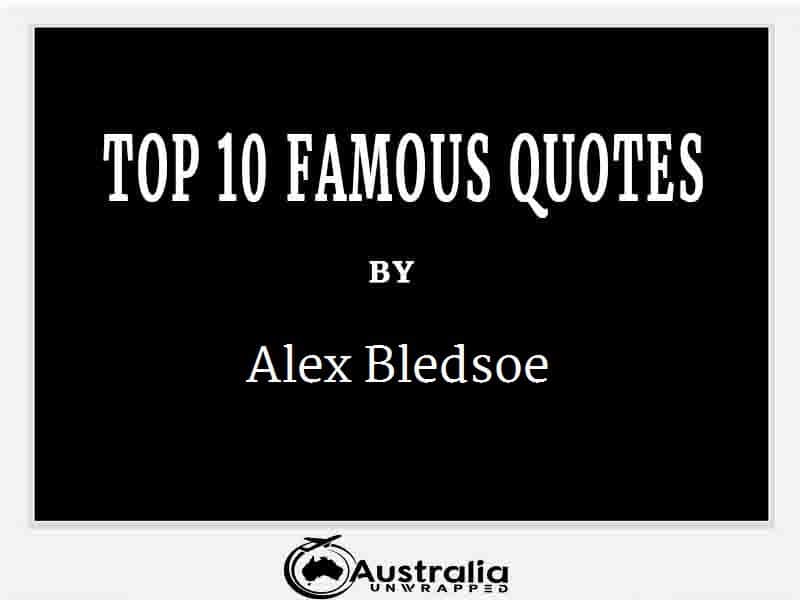 Quotes, who doesn’t love a good quote? This series of articles we look at Top 10 Famous Quotes by Author Alex Bledsoe, author quotes are always a challenge and fun to pick, with Alex Bledsoe you will find my Ten favourites of Alex Bledsoe’s quotes.

“It was still late summer elsewhere, but here, high in Appalachia, fall was coming; for the last three mornings, she’d been able to see her breath.

The woods, which started twenty feet back from her backdoor like a solid wall, showed only hints of the impending autumn. A few leaves near the treetops had turned, but most were full and green. Visible in the distance, the Widow’s Tree towered above the forest. Its leaves were the most stubborn, tenaciously holding on sometimes until spring if the winter was mild. It was a transitional period, when the world changed its cycle and opened a window during which people might also change, if they had the inclination.”
― Alex Bledsoe, Wisp of a Thing

“The pain of your loss will return. Less, but still considerable. I know you’ve worked hard to release it, but it can still take hold of you. I will help you sing away the fury, but I will not bear it for you.”
― Alex Bledsoe, Wisp of a Thing

“We also have noses that run and feet that smell.Sometimes the universe just doesn’t make sense.”
― Alex Bledsoe, To the Batpole: An Essay/Parody on Batman

“I felt that little knot in my belly that meant a mystery was taking its irrevocable hold. Usually this was a good thing, because usually I got paid for it. But here and now I was on vacation, and the last thing I wanted to do was spend it unraveling the truth of the strange prince, his rotund protector, and the girl I’d once saved from a bear. But damn it, I knew that’s exactly what I was going to do.”
― Alex Bledsoe, He Drank, and Saw the Spider

“Yes,but the news is no different from the drunk in the corner bar:he might have a good story, but that doesn’t maen you can trust it.”
― Alex Bledsoe

“Some of us -” She paused as she sought the words. ” – don’t die unless we want to. The selfish ones never do.”
― Alex Bledsoe, Wisp of a Thing

“We have to face the world like it is before we can make it what it should be.”
― Alex Bledsoe, Chapel of Ease

“Most of my family’s so dumb, they sit on the TV and watch the couch.”
― Alex Bledsoe

“Parades ain’t for the people on the floats, they’re for the ones watching it go by.”
― Alex Bledsoe, The Hum and the Shiver

“Because,” the newcomer said, “once upon a time, he drank, and saw the spider.”

― Alex Bledsoe, He Drank, and Saw the Spider