How Many Days After Ovulation Can You Get Pregnant? 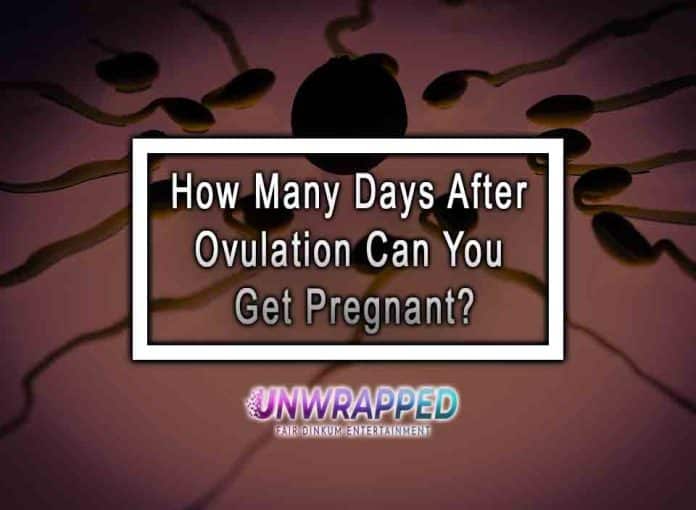 Can You Get Pregnant After Ovulation is Over

You’re probably wondering how many days after ovulation you can get pregnant. The short answer is that you can get pregnant at any time during your menstrual cycle, even if you’re not ovulating. However, if you are trying to get pregnant, you’ll want to know when you’re most likely to conceive. The days during which you’re most fertile are the days leading up to and including ovulation.

In this article, we’ll discuss the days of your cycle when you’re most likely to get pregnant, how to identify your fertile days, and how to increase your chances of conceiving during each cycle.

Read This: Can You Take Panadol When Pregnant?

When a woman is ovulating, an egg is released from one of her ovaries. The egg travels through the fallopian tubes to the uterus, where it can be fertilized by sperm. If this happens, the fertilized egg implants in the lining of your uterus; this process is known as conception.

If you’re trying to get pregnant and have unprotected sex during your most fertile time, which lasts for about 24 hours, there’s a chance that you could conceive that cycle if:

How Does Ovulation Work?

Ovulation is the process of a mature egg being released from an ovary, so it can be fertilized by sperm. The release of the egg is triggered by hormones that are produced in several parts of your body and sent through your bloodstream. The hormones travel to a group of cells called the pituitary gland, which sits just below your brain.

The pituitary gland makes another hormone that travels back to the ovaries and stimulates them to produce an egg.

As you approach midcycle about 14 days before you start your period, the follicle a sac that surrounds and protects each developing egg starts secreting estrogen, which makes your lining thick so that it can hold a growing baby if an egg is fertilized by sperm. When this happens, you’re said to be pregnant.

When Does a Woman Usually Ovulate?

You may be wondering how long it takes to ovulate. The answer is that it varies from person to person, but generally speaking, ovulation will occur no later than 12 days before your period starts. In most women, it occurs between 60 and 90 hours after the first day of your last period, meaning around 10-15 days before you expect to get a period.

This means that if you have 26-day cycles, the average, then ovulation could happen anywhere from two weeks before your next scheduled menstrual cycle begins. If you have irregular periods or know when they are coming approximately 14 days in advance then this can help narrow down when exactly you should look for signs of ovulation.

How Long After Ovulation Can You Get Pregnant?

While it’s possible to conceive a baby as early as 24 hours following ovulation, chances are that if you’re trying to get pregnant and you haven’t yet done so, your fertility window is much longer than that. Typically, ovulation occurs about 12 to 16 days before the start of the next period. For most women, this means that the best time to get pregnant is during the two to three days before ovulation.

Your most fertile days begin about two weeks before ovulation and continue until one day afterward. This means that if you want to increase your chances of getting pregnant during these days, it’s important to understand what causes ovulation in order to time intercourse correctly and track your cycle closely through an app.

There are a number of other factors that can affect your ability to get pregnant. These include:

You can also use an ovulation predictor kit or fertility monitor if it works with your cycle length. You can learn more about these options on our article on how to know when you’re ovulating.

As you can see, there are a number of factors that contribute to your ability to get pregnant. However, the most important thing for anyone trying to conceive is being aware of their own body and paying attention to how it works during ovulation. If you’re trying for a baby but have been having difficulties getting pregnant, then using an ovulation predictor kit could be just what you need. In conclusion, you can get pregnant anywhere from 12-24 hours after ovulation. We hope this article has helped answer your question.

More about Pregnant: Foods to Avoid When Pregnant?

Stay Connected
52,673FansLike
5,667FollowersFollow
829FollowersFollow
Previous articleFoods to Avoid When Pregnant?
Next articleEarly Pregnancy: How Much Bleeding Is Normal? – 2nd and 3rd Trimester