After Becoming Ill While Singing, KK, An Indian Singer, Died At 53 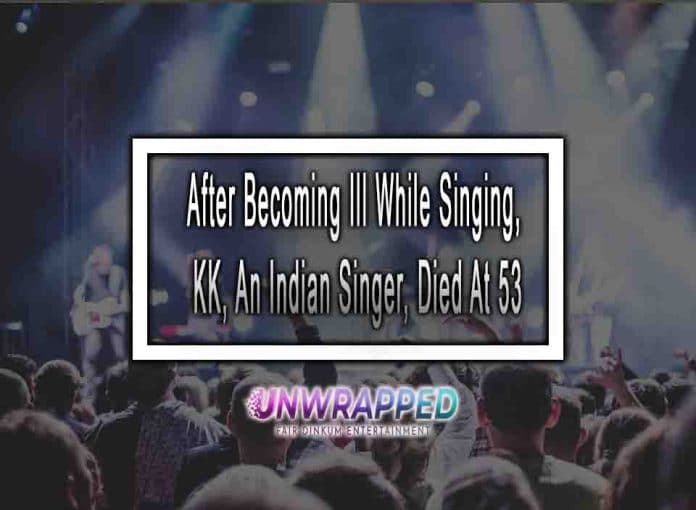 Krishna Kumar Kunnath, better known as KK, died on Tuesday following a concert in Kolkata. His mellifluous voice was responsible for some of Bollywood’s biggest hit songs in the 1990s and 2000s. His publicist verified that he had died.

KK was playing in front of a packed audience of college students when cameras recorded him wiping his forehead as he was rushed off stage after delivering his final song of the evening.

He allegedly complained of being quite chilly after the concert and wanted to return to his hotel. According to the newspaper, after fainting at around 10:30 p.m. local time, he was taken from his hotel to a hospital in south Kolkata when medics pronounced him dead.

A Little About Him

The multilingual singer, born in Delhi in 1968, has recorded songs in Hindi, Tamil, Telugu, Kannada, Malayalam, Marathi, and Bengali, among other languages.

Kunnath began his career in advertisements before breaking out on the big screen in the 1990s. As a playback vocalist, he dubbed his songs over movies, with the actors lip-syncing.

He has also served as a judge and mentor in reality singing competitions. He recorded two studio albums, Pal in 1999 and Humsafar in 2008.

How Did Everyone React?

Thousands of Kunnath’s Instagram followers paid homage to him. Earlier in the day, a photo of him performing in front of a boisterous audience was published with the caption: “Pulsating gig tonight at Nazrul Mancha… “I adore you all.”

In an outpouring of sadness, millions of young Indians went to social media after his passing. Cricketers, politicians, Bollywood actors, playback singers, and India’s prime minister, Narendra Modi, all paid respect to KK on social media, and the West Bengal state government honoured him with a gun salute.

He had been performing more minor Bollywood tunes in recent years because he wanted to “rediscover” himself, he claimed. He missed “the freedom to create your own songs and music,” according to The Times of India in 2018.

Check Out: Over Heard’s Abuse Claims, Disney Fired Depp From The ‘Pirates Of The Caribbean’

Concerns About The Arrangements

While the reason for the singer’s death is unknown, and an autopsy is scheduled for later today, concerns have been raised about the preparations at Kolkata’s Nazrul Mancha theatre, where the air conditioning was apparently not working correctly.

The artist was “sweating excessively when he took a pause to wipe his face,” according to videos filmed by spectators at the event, according to India’s NDTV news station.

According to the article, “at one point, KK was seen waving to a guy on stage and looked to be talking about the air conditioning.”

Many users on social media said that the auditorium, which holds 2,400 people, was packed. West Bengal authorities have opened an inquiry into the singer’s death.

Kunnath died of “suspected heart arrest,” according to Aroop Biswas, a West Bengal government minister. According to media accounts, he had injuries to his face and head, prompting investigators to investigate if he died an “unnatural death.”

You May Also Like: Singer KK, in Kolkata for a concert, dies at 53 – India Today.