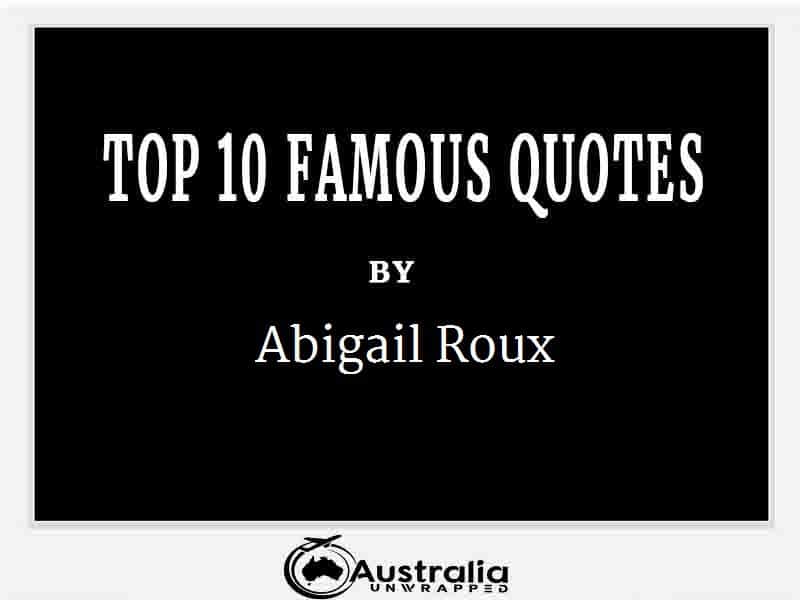 10 of My Favourite Abigail Roux Quotes

Quotes, who doesn’t love a good quote? This series of articles we look at Top 10 Famous Quotes by Author Abigail Roux, author quotes are always a challenge and fun to pick, with Abigail Roux you will find my ten favourites of Abigail Roux’s quotes.

Zane cocked his head. “I’m an artist. I’m a geek.” He felt Ty smile. “I am one badass motherfucker on a motorcycle.”

Zane dipped his head until they were staring into each other’s eyes. “And I’m yours.”
― Abigail Roux, Touch & Geaux

“You’re so freaking romantic. I don’t know how I keep my pants on.”
― Abigail Roux, Fish & Chips

“Zane was starting to piss him off again. Which was good, he supposed. It meant the urge to lick him all over was passing, at least.”
― Abigail Roux, Cut & Run

“I love you,” Ty said out of the blue, his voice almost sing-song.

“I loved you before I was drunk.”
― Abigail Roux, Stars & Stripes

“What do you want, MacGuffin, a duel?”

“No.” Julian held out both hands, one palm flat, the other held over it in a fist. “Rock, paper, scissors. Two out of three.”

Ty rolled his eyes and held out his fist, apparently willing to play. Julian hit his palm three times, and Ty kept time with his fist in the air. But when Julian threw a paper, Ty reached into his jacket with his other hand and pulled his gun, aiming it at Julian.

“Ty!” Zane said in exasperation from the front seat.

“You are an ass,” Julian muttered.”

“You told me one time that . . . I was your compass. I gave you direction when you were lost,” Ty said, nearly choking on the words. He glanced up, eyes reflecting like liquid in the low light. “Well, you were my anchor. You were something solid for me to hold onto. I wanted you to remember that.”
― Abigail Roux, Armed & Dangerous

“First time I saw you, after I got over hating you, I knew,” he said, echoing Ty’s words, “I knew I’d fall in love with you”
― Abigail Roux, Divide & Conquer

“Had a gay bull I had to sell last year. That was a damn nuisance. Gay son? That don’t cost me nothing.”
― Abigail Roux, Stars & Stripes

“Let me see it,” Julian demanded, and a moment later there were sounds of a scuffle from the back seat.

“I am AB positive and this is distinctly type O blood!” Ty finally shouted at him. “Look at the little Os!”
― Abigail Roux, Armed & Dangerous

“Ty is like… a ninja on crack.”
― Abigail Roux, Armed & Dangerous

“Zane heard Ty whuff from within the bathroom, and by the time he looked back, Ty had shoved Julian’s face against the shower wall and was holding him there by the back of his head.

“Want the other set of cuffs?” Zane asked, hoping to appease his cranky partner. “You could spread his arms out.”

Must Read: 1 Famous Saying About There Is Nothing Good Or Bad