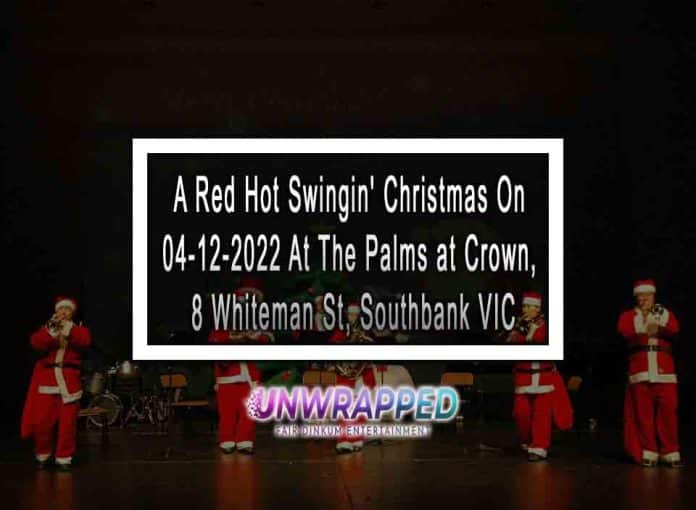 The leading lady of Australia, Rhonda Burchmore, performs with The Jack Earle Big Band, one of the best jazz groups in the nation, at The Palms at Crown’s A Red Hot Swingin’ Christmas. Rhonda and Jack will perform a fantastic holiday concert with stunning new arrangements and an eighteen-piece big band in honor of their forthcoming studio Christmas album.

The uncontested Queen of Christmas will electrify audiences with Red Hot versions of holiday classics as a tribute to the great swing masters. Rhonda and Jack will reinvent classic carols for a spectacular holiday unlike any other, including Have Yourself a Merry Little Christmas and Let it, Snow. Rhonda will give these Christmas classics new life as she easily moves through a repertoire filled with the most significant holiday songs while performing in the best vocal shape of her career.

Rhonda and Jack recorded their much-anticipated Christmas CD earlier this year, which fans will enjoy hearing live on this unique occasion. Twenty of Australia’s best musicians get together with this outstanding musical partnership to create a fantastic swing performance that will warm even the coldest hearts. Rhonda has been a mainstay of Christmas celebrations all around the nation for more than 40 years, winning over crowds at events like Carols by Candlelight, Carols in the Domain, and the Lord Mayor’s Christmas Carols.

She performed Red, Hot & Rhonda, a cabaret extravaganza, during Crown Casino’s opening in 1997 in front of over 60,000 spectators. This year, she will triumphantly return to the showroom stage, where she started her career. A Red Hot Swingin’ Christmas is a nostalgic stroll through the happiest season of the year, full of upbeat, uplifting, and joyful music. Get ready for a memorable evening of your favorite Christmas classics performed in a way that can only be done by the adored stage and movie actress Rhonda Burchmore. This Christmas performance is perfect for you if swing music is your thing!

Rhonda Entertainment professional Suzanne Burchmore OAM was born in Australia on 15 May 1960. In The Pirate Movie from 1982, Burchmore played Kate. In the 1988 production of Sugar Babies, Burchmore performed in her debut Australian theatre play alongside Garry McDonald and Broadway actor Eddie Bracken. Later the same year, she appeared alongside Mickey Rooney and Ann Miller in the West End production of Sugar Babies.