A Guide To Ethereum Smart Contracts 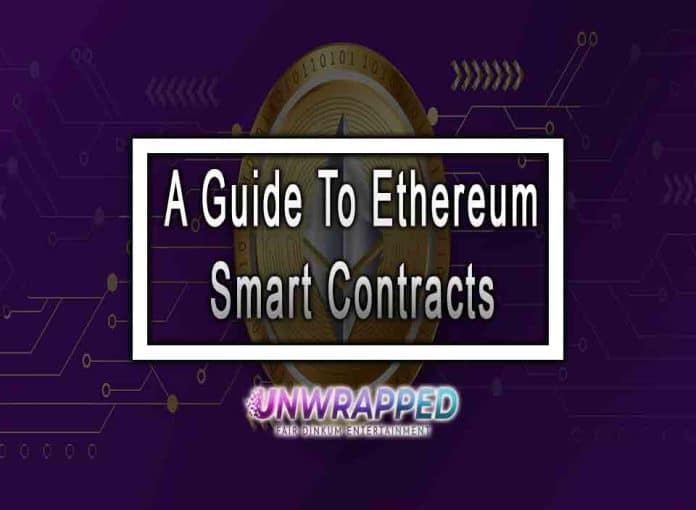 Since its inception in 2015, Ethereum has emerged as the second-largest cryptocurrency in the world – behind Bitcoin – by market capitalization. However, what makes Ethereum truly special is its technology.

It can support the use of smart contracts, as well as decentralized applications (DApps) while ensuring that they can operate without any downtime, control, fraud, or interference from third-party intermediaries. To explain more about how Ethereum smart contracts work, keep on reading this guide!

What Are Ethereum Smart Contracts?

Smart contracts are tools that can be used to automatically carry out transactions on the Ethereum blockchain when certain terms are met without the need for a third party. In other words, they are tools that can automate the implementation of an agreement to ensure that every party involved can be sure of the conclusion without contacting an intermediary.

An executed contract is a signed contract that validates a contractual connection that exists between multiple parties. All parties are obligated to follow the legal duties that are involved in the agreement as soon as the contract is signed. Since it was popularized by Ethereum, it has gone on to enjoy a wide range of applications.

How Does A Smart Contract Work?

Among other cryptocurrencies, including Bitcoin, TeslaCoin, and Cardano, Ethereum is truly special, thanks to its smart contract. These contracts can be considered as a digital form of an “if-then” statement that exists between multiple parties. By meeting the needs of the parties, the agreement can be complete.

The agreement can only be honored if the set conditions can be met. Take, for instance, a client demands 1000 pairs of sneakers from a particular manufacturer. The funds are locked in smart contracts by the former, which can only be released when the manufacturer delivers.

In other words, the legal contract can only be fulfilled when the farmer honors the agreement. On the other hand, the contract becomes canceled if the manufacturer does not deliver as promised. Then, the funds are transferred back to the client.

What is Special About Smart Contracts?

While the example illustrated above represents a small-scale application of smart contracts, they can be adopted for large-scale uses. For instance, the use of smart contracts can be programmed to suit the needs of the masses while offering other benefits.

Besides this, smart contracts have the potential to eliminate the need for resorting to courts when there are disagreements in the legal contracts. This can save all parties money and time.

The underlying smart contract code is responsible for security. Smart contracts can implement contractual terms. This makes them Turing-complete. This implies that they employ programming languages that come with statements of conditions, including else, if, and then.

These limiting rules and conditions in the agreement ensure that no external entity can tamper or manipulate the rules. In an ideal sense, these conditions expose hidden contract alterations. Once all parties agree to the terms, then the contract is set.

The smart contract is a novel technology, which ensures that contracts can be honored without the need for a third-party intermediary. Before anything, there must be an agreement between multiple parties. By establishing certain conditions and rules, the contract can be honored when these terms are met by one of the parties involved. The smart contract contains the agreement and they are encrypted in the blockchain network. All the Ethereum nodes operate on the Ethereum Virtual Machine to ensure consensus across the blockchain.

The Rise Of Bitcoin: Predictions From Experts

How can you Read Candlestick Graphs for Cryptocurrencies?