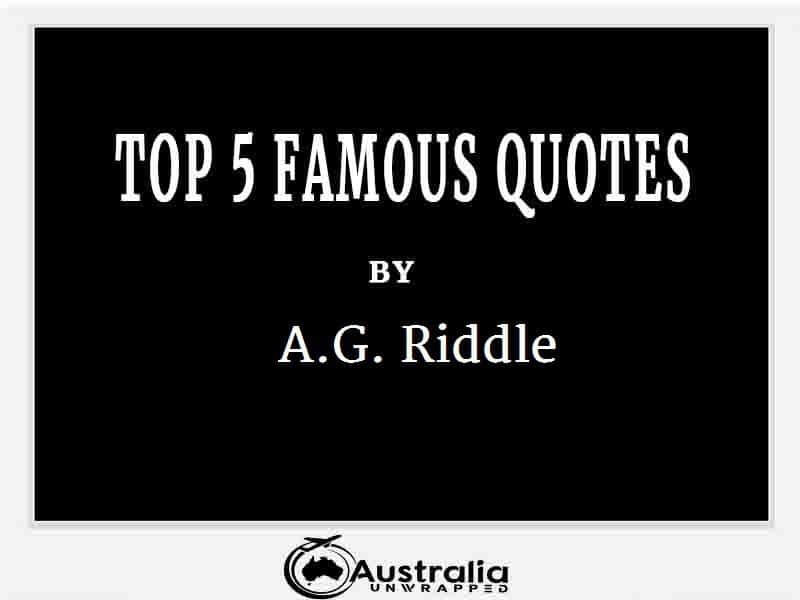 Quotes, who doesn’t love a good quote? This series of articles we look at Top 10 Famous Quotes by Author A.G. Riddle, author quotes are always a challenge and fun to pick, with A.G. Riddle you will find my ten favourites of A.G. Riddle’s quotes.

“Here’s a tip. The good guys ask you to get in the truck. The bad guys put a black bag over your head and throw you in the truck. I’m asking.”
― A.G. Riddle, The Atlantis Gene

“Yes, it’s a lie, but the media repeated it, and a lie repeated becomes perception, and perception is reality. Perception is also very hard to change.”
― A.G. Riddle,The Atlantis Plague

“Fight hard and don’t fear death. There are far worse things in life—one being living a life you aren’t proud of.”
― A.G. Riddle, The Atlantis Plague

“We attack whatever is different, anything we don’t understand, anything that might change our world, our environment, reduce our chances of survival. Racism, class warfare, sexism, east versus west, north and south, capitalism and communism, democracy and dictatorships, Islam and Christianity, Israel and Palestine, they’re all different faces of the same war: the war for a homogeneous human race, an end to our differences.”
― A.G. Riddle, The Atlantis Gene

“Science lacks something very important that religion provides: a moral code. Survival of the fittest is a scientific fact, but it is a cruel ethic; the way of beasts, not a civilized society. Laws can only take us so far, and they must be based upon something—a shared moral code that rises from something. As that moral foundation recedes, so will society’s values.”
― A.G. Riddle, The Atlantis Gene

“A mind that dwells in the past builds a prison it cannot escape. Control your mind, or it will control you, and you will never break through the walls it builds.”
― A.G. Riddle,The Atlantis Plague

“When you figure out that you’re fighting some other man’s war, walk away.”
― A.G. Riddle, The Atlantis Gene

“It’s always the same war. Only the names of the dead change. It’s always about one thing: which group of rich men get to divvy up the spoils. They call it ‘The Great War’—clever marketing.”
― A.G. Riddle, The Atlantis Gene

“And when he was, when he finally found love after a life without, he died, happy. And the woman, all she ever wanted was to know that she could change the world, and if she could change the heart of the darkest man, then there was hope for the entire human race.”
― A.G. Riddle,The Atlantis Gene

“The worst thing you can do for a child is give him everything he wants. Humans should grow up a little hungry, struggle a little, be made to strive for something. That’s what builds character. Struggle reveals who we really are. That journey shows us what we want from this world.”
― A.G. Riddle, Departure