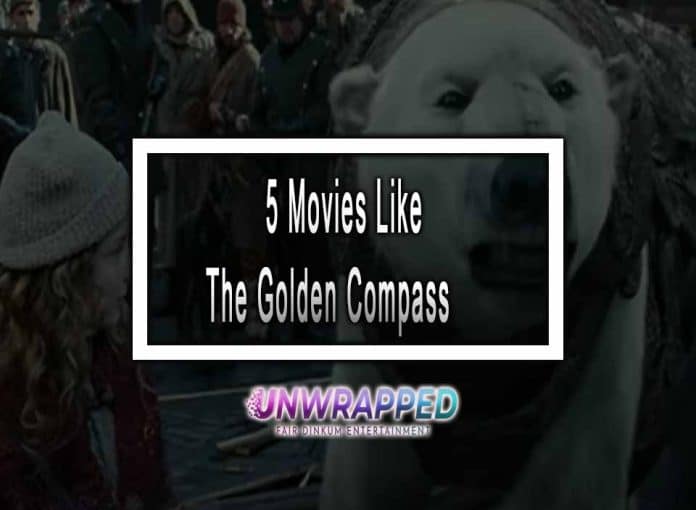 Here is our list of Movies like The Golden Compass that we are sure you will enjoy. It was no ordinary life for a young girl: living among scholars in the hallowed halls of Jordan College and tearing unsupervised through Oxford’s motley streets on mad quests for adventure. But Lyra’s greatest adventure would begin closer to home, the day she heard hushed talk of an extraordinary particle. Microscopic in size, the magical dust–discovered in the vast Arctic expanse of the North–was rumored to possess profound properties that could unite whole universes. But there were those who feared the particle and would stop at nothing to destroy it. Catapulted into the heart of a terrible struggle, Lyra was forced to seek aid from clans, ‘gyptians, and formidable armored bears.

Director: Iain Softley
Mortimer “Mo” “Silvertongue” Folchart has the special talent to bring characters out of books. One night he brings out three characters from Inkheart, a story set in medieval times and filled with magical beings. Capricorn (Andy Serkis) and Basta (Jamie Foreman), two villains, and Dustfinger (Paul Bettany), a fire-eater. Now, ten years later, Meggie (Eliza Bennett) discovers the truth and it’s up to her to escape Capricorn’s evil grasp.

Lord of the Rings

Director: Peter Jackson
An ancient Ring thought lost for centuries has been found, and through a strange twist of fate has been given to a small Hobbit named Frodo. When Gandalf discovers the Ring is in fact the One Ring of the Dark Lord Sauron, Frodo must make an epic quest to the Cracks of Doom in order to destroy it. However, he does not go alone. He is joined by Gandalf, Legolas the elf, Gimli the Dwarf, Aragorn, Boromir, and his three Hobbit friends Merry, Pippin, and Samwise. Through mountains, snow, darkness, forests, rivers and plains, facing evil and danger at every corner the Fellowship of the Ring must go.

Director: Matthew Vaughn
The passage from this world to the fantasy kingdom of Stormhold is through a breach in a wall beside an English village. In the 1800s, a boy becomes a man when he ventures through the breach in pursuit of a fallen star, to prove his love for the village beauty. The star is no lump of rock, it’s a maiden, Yvaine. Tristan, the youth, is not the only one looking for her: three witches, led by Lamia, want her heart to make them young; and, the sons of the dead king of Stormhold want her because she holds a ruby that will give one of them title to the throne.

Pirates of the Caribbean 3

Director: Gore Verbinski
Captain Barbossa rescue Captain Jack Sparrow from the land of the dead, they must face their foes, Davy Jones and Lord Cutler Beckett. Beckett, now with control of Jones’ heart, forms a dark alliance with him in order to rule the seas and wipe out the last of the Pirates. Now, Jack, Barbossa, Will, Elizabeth, Tia Dalma, and crew must call the Pirate Lords from the four corners of the globe, including the infamous Sao Feng, to gathering. The Pirate Lords want to release the goddess Calypso, Davy Jones’s damned lover, from the trap they sent her to out of fear, in which the Pirate Lords must combine the 9 pieces that bound her by ritual to undo it and release her in hopes that she will help them fight.

The Chronicles of Narnia: The Voyage of the Dawn Treader

Lucy and Edmund Pevensie are stranded in Cambridge, living in the house of their obnoxious cousin Eustace, while the grown-ups Susan and Peter are living in the USA with their parents. When a painting of a ship sailing on the sea of Narnia overflows water in their room, Lucy, Edmund and Eustace are transported to the ocean of Narnia and rescued by King Caspian and the crew of the ship The Dawn Treader. Caspian explains that Narnia has been in peace for three years but before he took his throne back, his uncle tried to kill the seven lords of Telmar, who were the closest and most loyal friends of his father.

More Movies: 5 TV Shows Like The West Wing to Watch