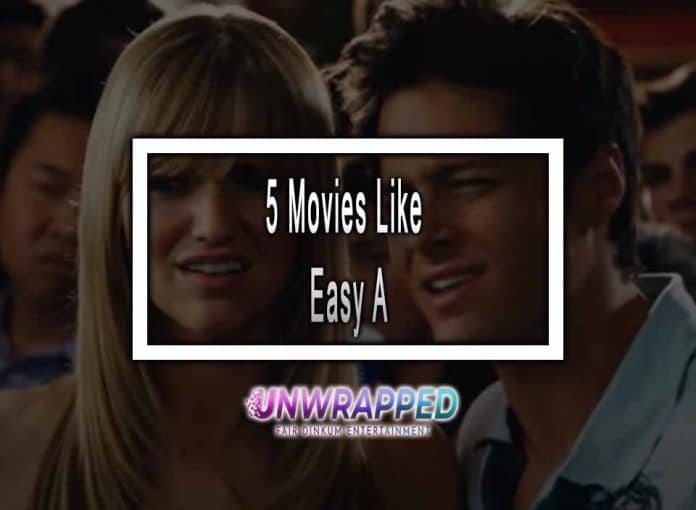 Here is our list of Movies like Easy A that we are sure you will enjoy. After a little white lie about losing her virginity gets out, a clean cut high school girl sees her life paralleling Hester Prynne’s in “The Scarlet Letter,” which she is currently studying in school – until she decides to use the rumor mill to advance her social and financial standing.

The Edge of Seventeen

Everyone knows that growing up is hard, and life is no easier for high school junior Nadine (Hailee Steinfeld), who is already at peak awkwardness when her all-star older brother Darian (Blake Jenner) starts dating her best friend Krista (Haley Lu Richardson). All at once, Nadine feels more alone than ever, until the unexpected friendship of a thoughtful boy (Hayden Szeto) gives her a glimmer of hope that things just might not be so terrible after all.

After slouching her way through life for 16 years and being made fun of by classmates, Jodi meets Stig (Luke Eisner), a seemingly perfect Swedish foreign exchange student who’s even taller than she is. Jodi’s new crush turns her world upside down and throws her into a surprising love triangle, but with the help of her two best friends (Griffin Gluck, Anjelika Washington) as well as her beauty queen sister Harper (Sabrina Carpenter), Jodi comes to realize that she’s far more than her insecurities about her appearance have led her to believe.

Jamie Rellis (Mila Kunis) is a New York City head-hunter trying to sign Los Angeles-based art director Dylan Harper (Justin Timberlake) for her client. When he takes the job and makes the move, they quickly become friends. Their friendship turns into a friendship with benefits, but with Jamie’s emotionally damaged past and Dylan’s history of being emotionally unavailable, they have to try to not fall for each other the way Hollywood romantic comedies dictate.

When Elle Evans (Joey King), a pretty, late-bloomer who’s never-been-kissed, decides to run a kissing booth at her high school’s Spring Carnival, she unexpectedly finds herself locking lips with her secret crush- the ultimate bad boy, Noah Flynn (Jacob Elordi). Sparks fly, but there’s one little problem: Noah just happens to be the brother of her best friend, Lee, (Joel Courtney) and is absolutely off limits according to the rules of their friendship pact. Elle’s life is turned upside down when she realizes that she must ultimately make a choice: follow the rules or follow her heart.

In his feature film directorial debut, comedian Bo Burnham deftly encapsulates the awkwardness, angst, self-loathing and reinvention that a teenage girl goes through on the cusp of high school. Given that the 27-year-old stand-up comic achieved fame as a teenager himself through YouTube by riffing on his insecurities, he is uniquely capable as the film’s writer and director to tell the story of Kayla, an anxious girl navigating the final days of her eighth grade year, despite creating a protagonist female instead of male. Like Burnham did more than a decade ago, 13-year-old Kayla turns to YouTube to express herself, where she makes advice blogs in which she pretends to have it all together.

I hope you find something on this list you will enjoy; if you like Easy A, we are sure you will enjoy the rest of these titles. Comment below on other movies you have enjoyed similar to Easy A .

More Movies: 5 Movies Like The Sum of Us to Watch