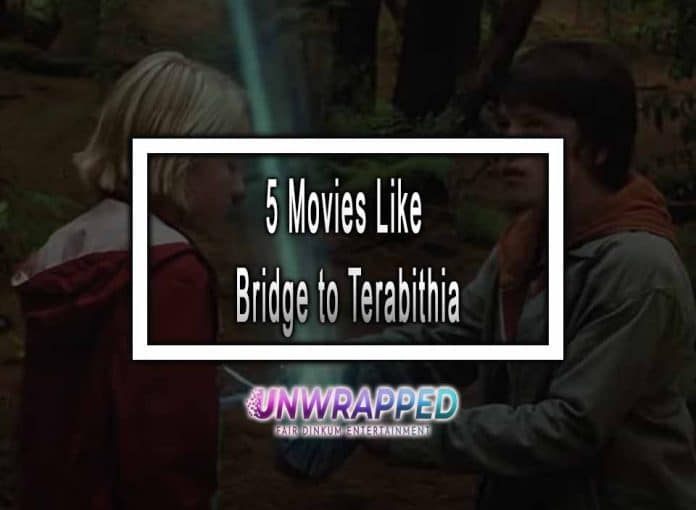 Here is our list of Movies like Bridge to Terabithia that we are sure you will enjoy. Growing up in the Redneck country isn’t easy for Jess Aarons, whose father struggles to make ends meet, has three arrogant bigger sisters, and a ‘baby’ he must watch at school. While in class, he bonds with cheeky newcomer Leslie Burke, whose scientist parents moved into the neighboring villa, despite her taking his only local prestige by beating him in the race. As they wander through the woods after school, they create a fantasy land called Terabithia in which they are superheroes of imaginary races. Meanwhile, Jess and her friends stand up to bullies at school, but then tragedy strikes and she has to adjust again.

It is based on the New York Times bestseller, which tells the story of August Pullman, an incredibly inspiring and heartwarming figure. Having been denied a mainstream education until now due to his facial differences, Auggie becomes the most unlikely of heroes when he enters the local fifth grade. In a time when his family, his new classmates, and the larger community struggle to find compassion and acceptance, Auggie’s extraordinary journey will unite them all and prove that you can’t blend in when you are born to stand out.

Almost a year has passed since the Pevensie children stepped through the wardrobe. Since the White Witch was defeated in Narnia, centuries have passed. The foursome are now sent back to Narnia to discover that everything has been destroyed and the Narnia they once knew has been lost forever. The Old Narnians come to aid Prince Caspian, who is leading a group of Old Narnians against the evil Miraz, who rules Narnia with an iron fist. What will happen to them? How long will it take for Aslan to return?

Dora and the Lost City of Gold

Dora spent most of her childhood exploring the jungle with her parents, but nothing could prepare her for her most dangerous adventure: high school. She quickly finds herself leading Boots, Diego, a mysterious jungle inhabitant, and a ragtag group of teens on a live-action adventure to save her parents and solve the impossible mystery behind a lost Inca civilization.

Where the Wild Things Are (film)

Max is a boy with a wild imagination, and he throws fits if others don’t follow what he wants. After an incident with his sister and her friends, and after a tantrum he throws as a result of his mother paying more attention to her boyfriend than him, Max runs away from home. In his wolf costume at the time, Max not only fled physically but also ran toward a world in his imagination. An ocean away, there exists a world where large wild beasts live, including one named Carol, whose temperament is very similar to Max’s.

Chronicles of Narnia: The Lion, the Witch and the Wardrobe 2005

World War II bombings forced four children from the same family to leave their town. A professor and a woman take them into their home. Lucy, the youngest member of the family, finds a wardrobe in which to hide during a game of hide-and-seek. In the wardrobe, she travels back and forth several times until she finds a place named Narnia. For the last time, the four children enter together after they have entered twice. In addition to battling wolves, they meet talking animals, run into an evil witch, and meet a magnificent lion named Aslan. Is this the end of their journey to Narnia or will they stay?

More Movies: 5 Movies Like The Godfather: Part II to Watch