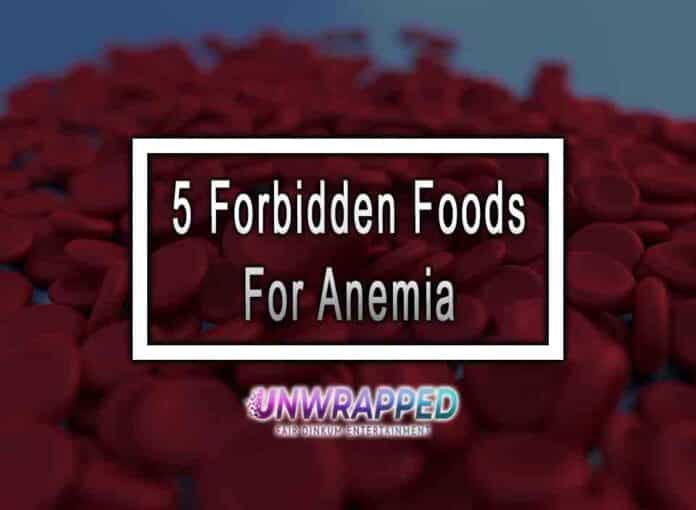 5 Forbidden Foods For Anemia – This is a disorder that may be identified by a reduction in healthy red blood cells, which are the cells in the blood that are in charge of transferring oxygen to the body’s tissues. As a consequence, the tissues have an inadequate supply of oxygen; as a result, they are unable to carry out their duties effectively, and you experience a persistent sense of exhaustion.

5 Foods To Avoid If You Have Anemia

Tannins in tea prevent iron from being absorbed into the body, despite tea, particularly green tea, is one of the plants with the greatest iron concentration. Since of this, individuals with anemia should not eat too much of this plant because it might worsen their condition.

The use of thyme, uva ursi, sage, mastic, loosestrife, pennyroyal, or dog rose are all examples of herbs that are not suggested for use. Because of this, if your iron levels are low, you should avoid drinking infusions made from these plants while you are eating.

Tannins found in coffee may prevent the body from absorbing up to sixty percent of the iron it needs. Additionally, even if supplements are taken on an empty stomach first thing in the morning, the tannins in coffee consumed later in the day may inhibit the body’s ability to absorb iron. It is recommended to refrain from consuming coffee for at least an hour after taking nutritional supplements or consuming food.

Phytic acid, also known as phytate, is an anti-oxidant that may be found in the hull or bran of the seeds of some plants, including nuts and whole grains. It functions as a storehouse for minerals such as phosphorus and other elements within plants.

On the other hand, it has the opposite effect on the bioavailability of minerals in the human body, particularly calcium, iron, and zinc. A certain amount of phylates may be tolerated by the body, but consuming too much of them can lead to inadequacies, kidney stones, and even hazardous consequences in extreme circumstances of heavy consumption.

Calcium and casein, a protein that is contained in milk, both have the ability to restrict iron absorption. Therefore consuming an excessive amount of milk and dairy products has the effect of preventing the absorption of iron.

After two hours of intake, it begins to have less of an impact on absorption. It is thus advisable to keep the use of iron supplements and dairy products completely apart from one another.

When it comes to legumes, some nutritionists believe that despite the fact that these foods are high in iron and contain fibers, the phytates that were discussed before prevent the iron from being absorbed by the body. Some people believe that eating them should be discouraged since, despite the fact that they may prevent some iron from being absorbed, they are an excellent source of folic acid and vitamin B12 and should not be avoided.

In order to fight it, it is recommended to mix vitamin C with legumes, since doing so facilitates better absorption of the vitamin C. Citrus fruits, bell peppers, and parsley are some of the foods that are particularly high in vitamin C content. Additionally, the fruit’s vitamin content is increased if it is allowed to mature on the tree and is consumed when it is in season.

Benefits Of Caffeine In Adult Nutrition

Is Sodium The Same Thing As Salt Which Is The Same...