5 Foods To Avoid If You Have Lymphedema 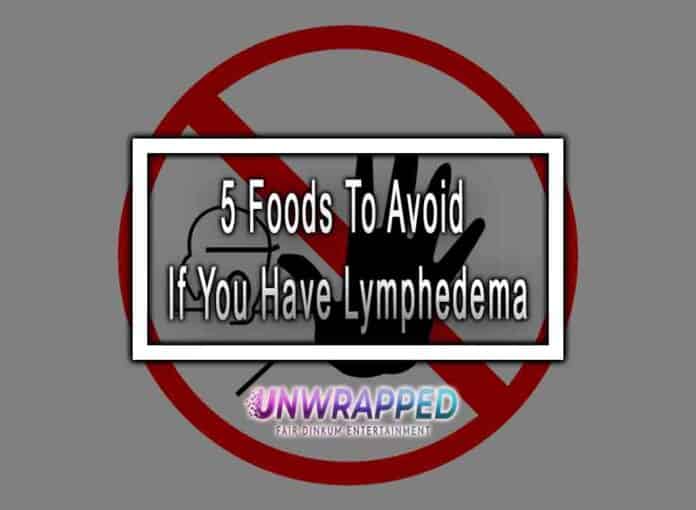 5 Foods To Avoid If You Have Lymphedema – The buildup of lymphatic fluid in various adipose tissues of the body, resulting in edema. This fluid collects just under the skin, most often in the arms and legs, although it may also develop in other areas of the body, such as the neck, belly, or genitals.

The lymphatic system is a network of nodes, veins, and organs that collect and carry lymph fluid, or lymph, to the bloodstream as part of the body’s immune system. The lymphatic nodes, together with the lymphatic veins, are crucial for filtering foreign material such as infection-causing elements and cancer cells.

Lymphedema develops when the lymphatic system becomes blocked, preventing lymph from emptying normally. The liquid then collects under the skin, causing edema.

Lymphedema may be caused by a variety of factors, including inherited disorders, surgery, radiation, cancer, or infections. It may be classified into two categories based on its appearance and causes:

5 Foods To Avoid If You Have Lymphedema

Because lymphedema is a protein-rich water edema, it has been incorrectly assumed that protein should be omitted from the diet in order to ameliorate it. However, it is presently suggested to restrict animal-based protein, particularly red meat, and increase plant-based protein.

If you don’t get enough protein, your body will remove it from your muscles and tissues. This will weaken the body, causing connective tissue swelling and worsening lymphedema. As a result, it is important to consume readily digested proteins on a regular basis.

This implies that, although meat-eating is not prohibited, it should be restricted, particularly red meat. Thus, limited eating of lean meats such as chicken or turkey would be permitted, with fish and vegetable proteins such as tofu taking precedence.

Furthermore, steam is preferred while eating them since the food is cooked in its own juices and preserves all of its taste. Oven or grill cooking techniques are also acceptable. The fried ones, on the other hand, are not suggested.

Many of the commercial foods we eat on a daily basis include fats, carbohydrates, and chemicals that our bodies are unable to handle. As much as possible, these items should be excluded from the diet.

Lymphedema sufferers should avoid sodium-rich additives or taste enhancers such as monosodium glutamate, sodium benzoate, sodium propionate, or sodium citrate since they exacerbate swelling. It is critical to read product labels and learn which ingredients are dangerous.

Fluid retention is aided by salt. Patients with lymphedema should follow a low-sodium diet as a result. Lemon, vinegar, spices, and chili peppers all add taste to recipes while still being healthier options.

Lymphoma patients should consume water just like everyone else. It is advised that you drink 2 liters of water every day. If you have lymphedema, however, you should drink mineral waters that are low in sodium.

Commercial sauces, condensed broths, and ready-to-eat dishes should be avoided. These are high in salt, which isn’t good for reducing edema, as well as trans fats, processed sugars, and additives. These ingredients improve the flavor and make them more addictive, but they are very harmful.

In fact, eating ultra-processed meals has been linked to a higher risk of acquiring cancer. As a result, dietitians advise eating natural or minimally processed meals.

How To Retain The Peace At Home