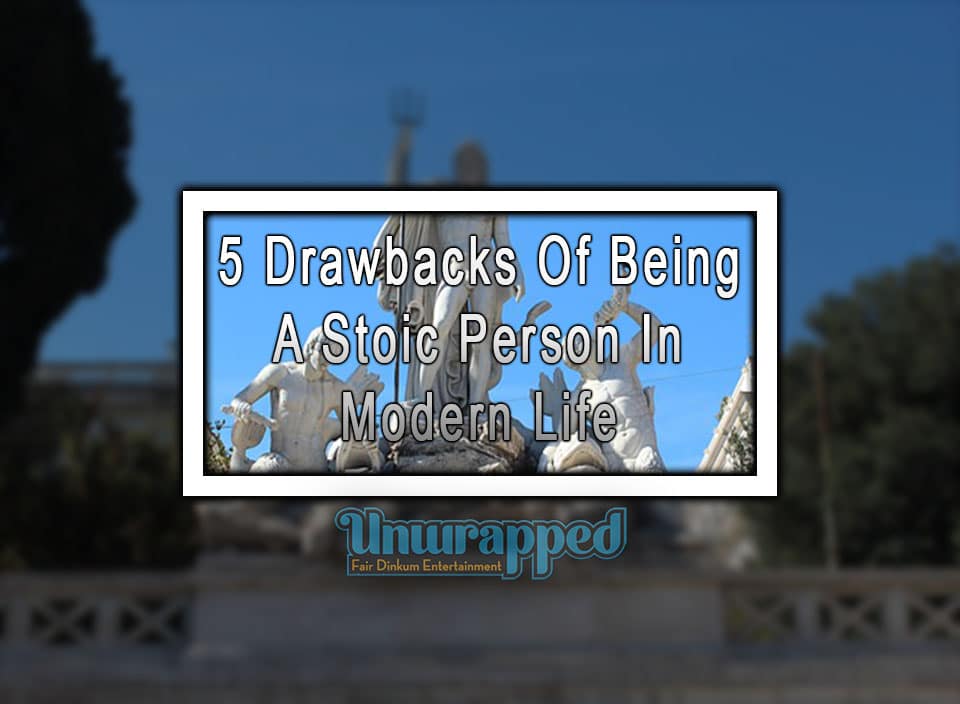 Being a Stoic Person is Not Great All The Time, Here’s Why!

Everything in this world is made up of positive and negative elements, this was already established in China many millennia ago (yin and yang), and this naturally concerns Stoicism, a rule of behavior-based doctrinally in principle and fundamentally in ethics, although with their own logical and physical conceptions.

Stoicism as a philosophical doctrine tries to dominate the passions that disturb life using virtue and reason. As such, their goal is to achieve happiness and wisdom regardless of comforts, material goods, and fortune. Hence, it also designates a certain ethical attitude, related to strength and equanimity in character.

There is not the least doubt about its advantages, since its immense human and rational value has been confirmed since its creation. But what are the downsides of being a Stoic in modern times?

There are many arguments for saying that it would be absurd to follow Stoic doctrine today. First, there are no longer any schools of philosophy such as they existed in ancient Greece. Also, this philosophy provided answers to an era and to issues that are no longer ours (and of which we cannot get a fair idea). On the other hand, philosophy was a way of life based on a practice inseparable from a theory (school teaching). However, philosophy, as it is conceived and practiced today, has become almost exclusively speculative.

If we question the academic philosophers, their objections are hardly more compelling. There can no longer be any Stoicism or Stoics, in particular, no one can claim to teach a doctrine of which we have retained only a memory mutilated by the disappearance of almost all of the texts (not to mention the transmission of the oral teaching). They also highlight the impossibility of defending the epistemological and theological theses on which the doctrine was based (and without them the entire system collapses). Some also argue that today there are other forms of medicine for the soul (psychoanalysis, psychotropic drugs, cognitive therapy, psychotherapies, etc.) more likely to lead to an “art of serenity.”

2. You Can Look Less Compassionate, Cold, And Uninteresting

Other arguments are more specious, foremost among them the idea that the sage Stoic is a cold and strict being, devoid of feelings and infinite sadness, or the unacceptable pride of those men who claim to master everything by the only force of their will.

Stoicism is a brutal philosophy. It teaches you not to give up if you have problems, or if anything happens. Therefore, it could be considered cold, distant, and distant. It’s a brutal way of self-control and a means to an end in a time of great violence, hardship, and turmoil in the enormous political changes that took place at that time.

3. It May Seem as You’re Separated From Your Emotions

There are things we can control. And others, of which we have partial control. But about some, we can do nothing. The latter can be positive or negative. What the Stoic school proposes is to prepare and prevent ourselves from whatever negative things may happen to us. It will also give us greater preparation for its possible impact.

4. Relationships With Other People Can Be More Difficult

Due to the self-control built by the Stoics, their composure, and calmness, it may seem that the Stoics are not capable of maintaining any relationship, friendly or romantic. One of the reasons is that almost every Stoic will encounter misunderstandings from the people around him. But one thing is for sure – Stoicism will help you accept the people around you and realize that you have no control over their thoughts. This may mean ending relationships with some people, but it should also be accepted on your path to Stoicism. Don’t expect too much from others and don’t think that everything you do will come back to you in reciprocity.

Also See: Why Stoicism Promotes Living According to Nature

5. You May Seem Boring to Other People

Because Stoicism makes you liberated, people who watch from the corner may think that Stoics lead a boring life. But what they don’t know is that nothing is boring in accepting change, opposing injustice, or in developing self-confidence. Life experience has nothing boring and all that Stoicism offers while maintaining control over your emotions and reasoning so you can enjoy the experience even more. Endless consumerism is boring. Drama is boring. Overcompensating is boring. Moral weakness is boring. Stoicism isn’t.

For those who are in favor of the teachings that this school offers, it’s not a question of advantages or disadvantages but of the search for happiness, considered in contrast to pleasure as a lasting state. Freed from the contingencies of the cosmos, a man rises in his being and reaches a state of ataraxia (absence of soul troubles) which characterizes this happiness.

Are there modern Stoics?

However, Modern Stoicism, also known as the New Stoicism, has taken on a decidedly American feel. While the Stoics of the Classical era taught that “virtue is the only good,” New Stoics seem to focus more on leveraging ancient teachings to be more effective social media brand managers.

Stay Connected
41,936FansLike
5,682FollowersFollow
867FollowersFollow
Previous article
6 Books You Should Read To Understand Stoicism Fully
Next article
5 Reasons Why Is Stoicism An Excellent Philosophy To Live By

6 Meaningful Stoic Quotes About Fear That Will Change Your Life