5 Biggest Misconceptions People Have About Stoicism 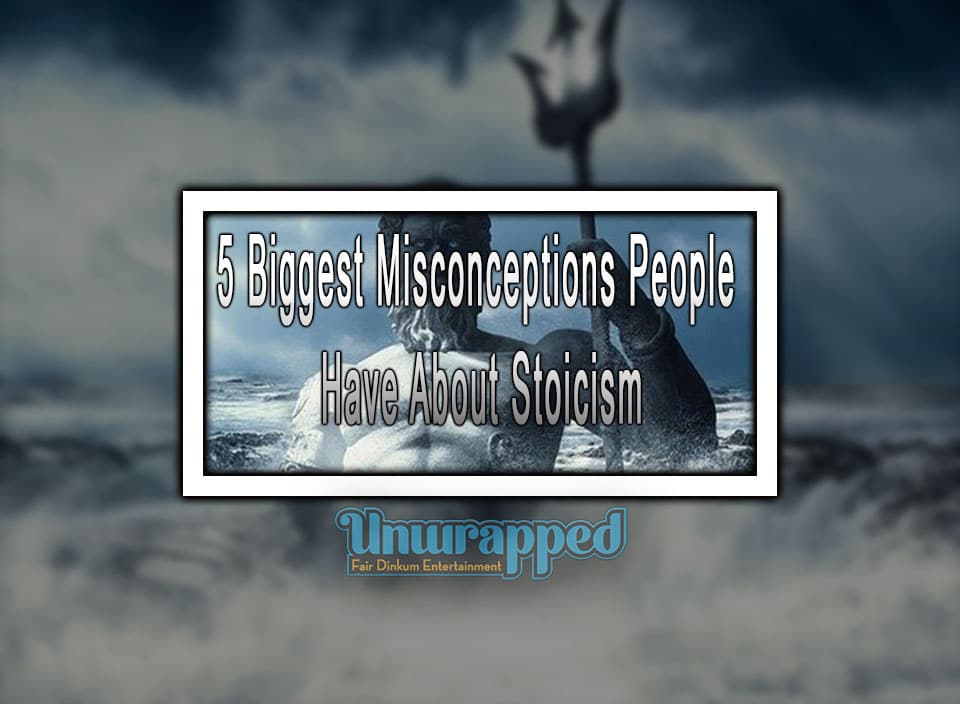 It’s funny how human consciousness works – and especially the unconscious – but also tragic. Almost all of our conflicts are based on so-called “misunderstandings”. “Misunderstandings” already tells us what it’s about: one person doesn’t understand another and vice versa. A problem that Stoics are also regularly faced with.

Anyone who has recently studied Stoicism will soon find that he/she had many misconceptions about Stoics. This is not surprising, since Stoicism is not part of the curriculum in schools and one comes across the term “stoic calm” in everyday language, which describes people who are not disturbed by anything and who are “indifferent” even in the face of adverse circumstances. So there is plenty of room for numerous misconceptions about Stoics.

The Stoics have always viewed emotions (emotions such as anger, hatred, and joy) as a threat to peace of mind. Only he who overcomes his emotions through correct (reasonable) judgment becomes virtuous.

The modern Stoic doesn’t see emotions as a disease that has to be fought, but rather as symptoms that should be observed and, if necessary, contained so that an illness doesn’t break out. So it’s not about a general suppression or hiding of emotions. On the contrary: Stoics encourage us to perceive our feelings and to reflect on their causes and occasions. When they appear, one should be vigilant and carefully observe where longings and desires come from. Only if you can perceive and classify them at an early stage can they avoid influencing your rational observation. A Stoic may well have a rich emotional life, but should not allow himself to be overwhelmed or manipulated by emotions. What matters is not what we feel, but how we respond to our sensations.

Stoicism commands one to behave virtuously without relying too much on the opinions and reactions of others. According to the Stoic attitude of self-sufficiency, one shouldn’t join the opinion of others too quickly or meet their expectations.

Stoic is not indifferent to other opinions. He is quite capable of empathy and takes all possible opinions into account in his situation analysis. However, he will not allow himself to be captured. Stoic maintains his independence – above all against a dominant “ruling opinion”, which hastily pushes dissenting opinions aside, or against a “mainstream” that one is only too happy to join voluntarily. In essence, it’s about ensuring that your integrity is not available, is unconditionally protected, and is not negotiable.

3. Misconception: Stoics are not politically active.

Stoics always had both feet on the ground; they were never aloof philosophical thinkers. The most important politicians and rulers who saw themselves as Stoics include, for example, the Roman senator Cato the Younger, who lived in the 1st century BC. He held important offices in the Roman Republic, as well as Emperor Marcus Aurelius, who ruled the Roman Empire in the 2nd century AD. It would therefore be a misunderstanding to think that Stoic ethics recommend the equanimity of acceptance of all political conditions and events. Right from the start, the Stoics were concerned with building the best possible society for them. Stoicism has a clear moral mandate for this. The ultimate goal is virtue and moral integrity. In this respect, Stoicism has always been a philosophy of social engagement. Because it’s not virtuous to stand idly by injustice or immoral behaviour. Hence there is only an apparent contradiction between focusing on one’s thoughts and the social dimension of Stoicism. For politically active Stoics like Cato or Marcus Aurelius, the teachings of Stoicism were never an end in themselves, but a guide to action and a guideline for their socio-political commitment.

4. Misconception: Stoics always want to be in control

Stoicism propagates a purely rational behaviour oriented towards the given circumstances: Always be the master of your decisions; don’t let anger, fears, or urges rule over your life! The Stoic therefore always acts in a controlled manner in his reactions. And in his balanced deliberations and planning, he is careful to stay in control.

This doesn’t mean any control obligation. To achieve the goal of peace of mind, precise planning and strict self-organization are often helpful, but relinquishing control can certainly contribute to peace of mind. The Stoic in particular should succeed in this because he is always aware of how little control we ultimately have over our lives. As one of its main messages, Stoicism conveys the knowledge about what we cannot control – and as a consequence recommends not to overly occupy oneself with the uncontrollable.

5. Misconception: Stoics are prone to pessimism.

The Stoic attitude that we should simply accept without resistance the things that are beyond our control often comes across as pessimistic. This impression may be reinforced by the daily mental exercise of “negative visualization” recommended to the Stoic. In this exercise, you should always imagine the worst that can happen.

The knowledge of the Stoics that most things in life are not under our control and that our loved ones can be snatched away from us at any time is not a pretext for falling into fatalism and feelings of powerlessness and not a plea for a defeatist attitude. It’s true that the Stoic is not an incorrigible optimist; because he doesn’t assume that everything will go well of course. But he’s not a pessimist either. Rather, for him, everything is subject to the reservation: “If fate allows it.” With this omnipresent reservation, the Stoic always tries to be as attentive as possible to what we have and to appreciate it properly – because it could be over soon.

What can you do? You can try Stoicism if you want. I highly recommend it. Before that, research in detail the principles of Stoicism. Ask an acquaintance who practices Stoicism for advice. Don’t look with prejudice at something you don’t have enough valid information about. Stoicism has always been a universal and easily applicable philosophy of life for those who understand the essence and core of this school. Adapt it to your daily life, then adopt a new way of thinking and your quality of life will improve.

5 Myths About Stoicism That You Should Be Aware Of

Lack of Motivation: The 5 Motivational Sources for Life

What is Stoicism? A Definitive Guide to Stoic Philosophy