What Venture Capitalists Don’t Want You To Know 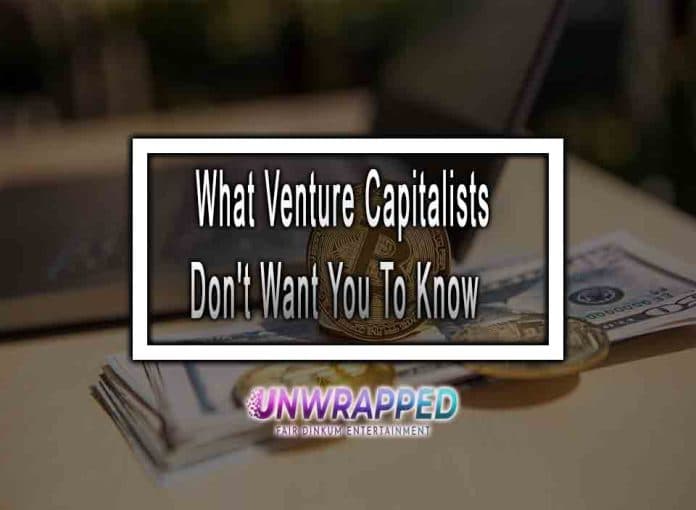 Venture capital has been a critical source of funding for high-growth start-ups for the past 30 years. Amazon, Apple, Facebook, Gilead Sciences, Google, Intel, Microsoft, Whole Foods, and many other inventive firms owe their early success to venture capitalists. Venture capital has grown in importance as a source of economic value. Consider that in 2015, VC-backed public businesses accounted for 20% of market capitalization and 44% of research and development investment in the United States.

Despite this, little is understood about what venture capitalists do and how they generate value. Most of us believe they meet a critical market need by linking entrepreneurs with strong ideas but no money with investors with money but no ideas. But, while the firms that venture capitalists invest in may create headlines and change whole sectors, venture capitalists themselves prefer to stay in the shadows, shrouded in secrecy.

After investing money in a firm, venture capitalists roll up their sleeves and become active counsellors. Sixty per cent of VCs said they “interact substantially” with their portfolio companies at least once a week, and 28 per cent said they do so multiple times a week. They offer a wide range of post-investment services, including strategic guidance. They provide strategic guidance to 87 per cent of their portfolio companies. Connections to other investors (72 per cent), connections to customers (69 per cent), operational guidance (65 per cent), assistance in hiring board members (58 per cent), and assistance in hiring employees.

The primary technique VCs utilize to give value to their portfolio firms is intensive advising efforts. True Ventures’ Jon Callaghan claims that consulting services are essential in recruiting the top entrepreneurs his company has spent 15 years and $10 million creating. We do this because we’ve discovered time and time again that the founders are critical to forming and managing the venture capital teams that produce the best results.

More than a third of deals are generated by referrals from VCs’ previous coworkers or friends. Other relationships are also important: 20% of opportunities are referred by other investors, and current portfolio businesses refer to 8%. Only 10% of responses come from firm management’s cold email pitches. On the other hand, VCs makeover 30% of the revenue through establishing contact with entrepreneurs. We think that the fairest chances do not necessarily present themselves in our offices. Instead, we discover and investigate megatrends and then seek out entrepreneurs who share our vision for the globe’s future. These findings demonstrate how challenging it may be for entrepreneurs who are not well-connected in social and professional circles to obtain capital.

Founders that beat a path to a VC’s door without any connections create few transactions. Some of the VC executives we spoke with acknowledged the drawbacks of this reality, such as how they need to connect to specific networks that might hurt entrepreneurs who aren’t white guys. Despite this, many venture capitalists believed the situation was improving. While women and underrepresented minorities have historically faced significant barriers to entry into these networks, the industry has begun to acknowledge the missing possibilities and potential these groups offer. Firms have made broadening their alliances a priority, and as a consequence, these networks are becoming more accessible.

Even if an entrepreneur can connect with a VC, receiving money remains slim. According to our research, a VC firm examines 101 prospects for every close deal. Twenty-eight of those changes will result in a meeting with management; ten will be discussed in a partner meeting; 4.8 will go through due diligence; 1.7 will negotiate a term sheet with the start-up, and just one will be funded. The average deal took 83 days to conclude, and businesses spent an average of 118 hours on due diligence, calling an average of 10 references.

Though VCs reject much more offers than they accept, they may be highly pushy when they find a firm they like. When VCs become enthused about a start-up, especially if it has offers from other businesses, the power dynamic may swiftly shift. The top start-ups with inspirational founders face stiff competition for funding. To win these sorts of chances, VCs must have a clear message about what they will and will not do, give meaningful venture help, and approach audacious aspirations. And they have a significant impact on fund results.

VCs Only Earn Money On Exit

VCs only earn from exits, such as an IPO or the sale of a portfolio firm. However, they gain money through management fees, and to obtain these, they must create many venture funds. So they’ll need to raise more money. When they attempt to raise another fund, part, if not the majority, of their track record will still be illiquid, with investments in firms that haven’t yet gone public or been bought.

The most current values will be used to value such illiquid enterprises. VCs can tell their investors, the LPs, how good the return on this investment has been—even if it’s only paper gains—if you raise another round at 2x-3x the price of the previous one. When they raise their next venture capital fund, they may sell this. The venture firm becomes a zombie if there isn’t another fund.

Finally, during the last decade, several firms have established investment arms to capture the potential of entrepreneurial activity, and they may learn from the VC industry’s tactics. The importance of the management team and deal sourcing in determining the profitability of investments should influence who they finance—and where and when they fund them. In addition, many local policymakers who want to stimulate economic growth by building sustainable venture capital ecosystems might benefit from knowing VC strategies.

It is important to remember that government leaders and officials can encourage high-quality, high-potential businesses. Finally, colleges are frequently the source of inventions that VCs invest in. Officials at universities can learn how to better capitalize on the inventive activities in their halls. Developing contacts with prominent venture capitalists and developing an entrepreneurial ecosystem can boost start-up activity. We hope you must have acknowledged everything regarding Venture Capital.

Read On: Initial Public Offering on the ASX

Stay Connected
41,936FansLike
5,684FollowersFollow
815FollowersFollow
Previous article
How to Write a Cold Email that Actually Work and Converts
Next article
Board Portal Software: Make Your Best To Upside Business!

Learn the Importance of Neat Bookkeeping

How Much Do I Need to Retire Comfortably?