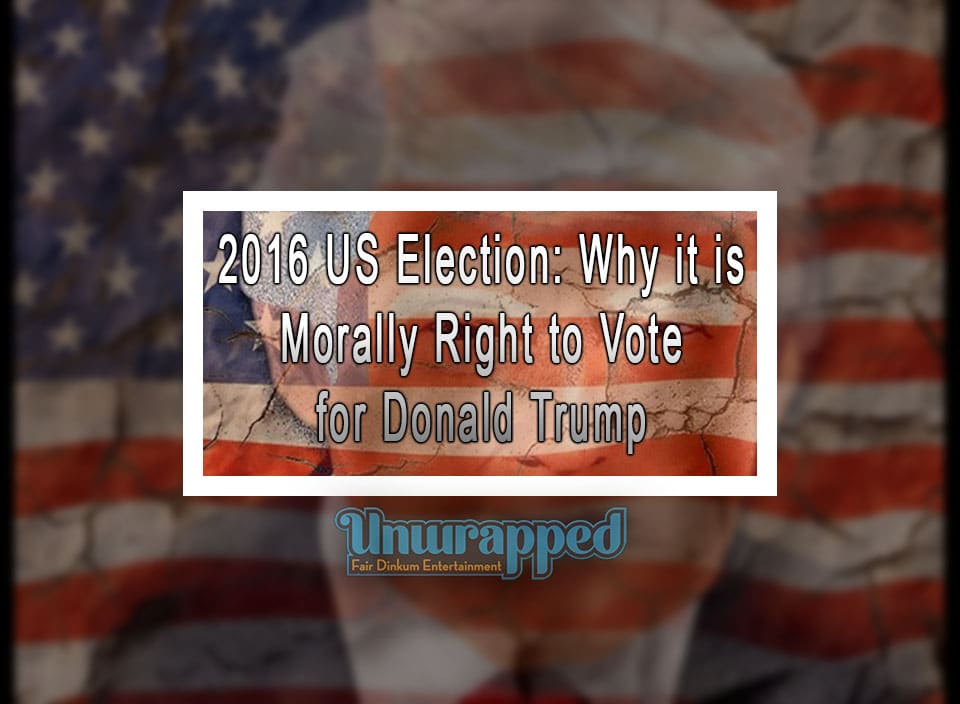 Why it is Morally Right to Vote for Donald Trump in 2016 US Election?

The 2016 US election has been surrounded by a set of dramas, just like any other election. But this one is unique in its own sense. The candidates are finalizing their campaigns at a time when allegations against them are at peak. Trump is accused of, among many things, disrespect towards women and different groups in the society. Hillary Clinton equally has a trail of corruption allegations behind her. Mentioning the term “Email” scares her.

Voters are thus left with one choice, vote for the “lesser evil of the two.”

American citizens have to exercise patience throughout this tough political era. Friends who hang out together will most definitely make varied decisions. Respect among them is still important before and after the elections. Friends need to continue communicating despite the decision made. That is actually where the talk of morality begins. Are you moral enough to understand your friend has his own opinion? And that whatever the opinion, it should not destroy years of friendship you’ve enjoyed?

Having ensured the safety of your friendship, we can consider whether a vote for Donald Trump morally right? Yes, it is.

2016 US Election – A Good Candidate with Flaws

My opinion is that once you cast a vote for Donald Trump you will not have done any immoral thing. A vote for a flawed candidate is not immoral if you believe in his abilities to benefit the nation than the other candidates. In any case, this is actually the most moral thing for our country.

Yes, he is brash, bombastic and egotistical. Many of his statements do not have nuance. On many occasions, he has spoken out mistaken ideas (remember “bombing terrorist families?”). Many have been insulted by his words. And in the event of all these, he is usually slow to disown his words. He supports them with an even more angering statement. He has been in three marriages, all of which he says he has been unfaithful. All these are without doubt flaws. But can flaws disqualify a candidate?

Turning the side of the coin, some allegations against Donald Trump are unjustified. Having worked in the business arena for years, he doesn’t seem he is racist or anti-immigrant. These are exaggerations magnified by the press due to past statements he carelessly made.

Mr.Trump is a deeply patriotic citizen who wants to give this nation his best. In the business sector, he has solved countless problems. Those that have had a personal interaction with him say he is hugely kind and generous.

Now that begs a very important question. Can you leave a candidate with flaws for one who is out rightly morally wrong? We are all aware that corruption is an immoral thing. Well, who has had these allegations against her? Is it Trump?

So far we are aware that the election is close. Thus, if you decide not to vote for Trump, in favour of a write-in candidate, then you are directly benefiting Hillary Clinton. You will simply help her require one less vote to win.

During the Obama presidency, the liberal federal government has become hugely controlling. This is a year when we can say no to forced control of our lives. Remember that if you know the right thing to do, and you fail to do it, that is a sin to you. Now that is what we mean by morality.

This is one of the easiest decisions you can make considering the Trump-Clinton election is all messy. But do not flee from your moral responsibility by refusing to vote.

Donald Trump already has a list of 11 judges that he would like to be in the Supreme Court if he wins. The list already foretells the kind of president he would be. His “dream list” of outstanding judges would go a long way in upholding the original meaning of the constitution. Trump also says that his primary source of advice would be the Federalist Society. This is an organization that advocates for “original meaning” views that Justice Scalia held on before his death.

The kind of Supreme Court under Donald Trump presidency returns the control of the nation back to the people. It will eliminate dictatorial judges known to make law from the bench.

Donald Trump pledges to reduce taxes while Hillary Clinton plans to raise them. Corporations currently have a 35% tax rate that Trump wants cut to 15%.

When it comes to individual taxes, Mr.Trump’s suggestion is a top rate of 25%. This is almost half of the 45% that Hillary Clinton favours. Again, in this case, Trump’s lower taxes will help businesses to expand rapidly and many additional jobs. The overall impact is that the economy will snap out of its eight years of anaemic growth.

It is moral to support lower taxes can help create more jobs. Obama has developed policies in the past eight years that have not been favourable to the lower-income and middle-income families. It is difficult to get jobs, leave alone full-time jobs. If you are lucky enough to get one, you struggle so as to survive. It, therefore, does not come as a surprise that these people are overwhelmingly supporting Donald Trump.