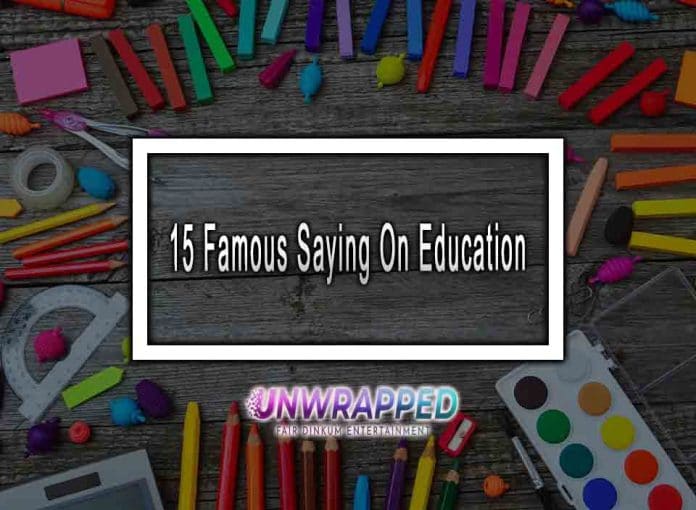 Here are my favorite 15 quotes or sayings on Education be sure to comment at the end with your favorite:

“Only the educated are free.” -Epictetus

“At first I felt dizzy – not with the kind of dizziness that makes the body reel but the kind that’s like a dead emptiness in the brain, an instinctive awareness of the void.”― Fernando Pessoa

“Sit still with me in the shade of these green trees, which have no weightier thought than the withering of their leaves when autumn arrives, or the stretching of their many stiff fingers into the cold sky of the passing winter. Sit still with me and meditate on how useless effort is, how alien the will, and on how our very meditation is no more useful than effort, and no more our own than the will. Meditate too on how a life that wants nothing can have no weight in the flux of things, but a life the wants everything can likewise have no weight in the flux of things, since it cannot obtain everything, and to obtain less than everything is not worthy of souls that seek the truth.”― Fernando Pessoa

“A tree’s shade is worth more than the knowledge of truth, my sons, for a tree’s shade is true while it lasts, and the knowledge of truth is false in its very truth. The leaves’ greenness is worth more, for a right understanding, than a great thought, for the leaves, greenness is something you can show others, but you can never show them a great thought. We are born without knowing how to talk and we die without having known how to express ourselves. Our life runs its course between the silence of one who cannot speak and the silence of one who wasn’t understood, and around it hovers — like a bee where there are no flowers — a useless, inscrutable destiny.”― Fernando Pessoa

“Giving importance to what we think because we thought it, taking our own selves not only (to quote the Greek philosopher) as the measure of all things but as their norm or standard, we create in ourselves, if not an interpretation, at least a criticism of the universe, which we don’t even know and therefore cannot criticize. The giddiest, most weak-minded of us then promote that criticism to an interpretation that’s superimposed, like a hallucination; induced rather than deduced. It’s a hallucination in the strict sense, being an illusion based on something only dimly seen.”― Fernando Pessoa

“Our problem isn’t that we’re individualists. It’s that our individualism is static rather than dynamic. We value what we think rather than what we do. We forget that we haven’t done, or been, what we thought; that the first function of life is action, just as the first property of things is motion.”― Fernando Pessoa

“My lack of initiative was the root cause of all my troubles – of my inability to want something before having thought about it, of my inability to commit myself, of my inability to decide in the only way one can decide: by deciding, not by thinking. I’m like Buridan’s donkey, dying at the mathematical midpoint between the water of emotion and the hay of action; if I didn’t think, I might still die, but it wouldn’t be from thirst or hunger.”― Fernando Pessoa

“My whole life has been a battle lost on the map. Cowardice didn’t even make it to the battlefield, where perhaps it would have dissipated; it haunted the chief of staff in his office, all alone with his certainty of defeat. He didn’t dare implement his battle plan, since it was sure to be imperfect, and he didn’t dare perfect it (though it could never be truly perfect), since his conviction that it would never be perfect killed all his desire to strive for perfection. Nor did it ever occur to him that his plan, though imperfect, might be closer to perfection than the enemy’s. The truth is that my real enemy, victorious over me since God, was that very idea of perfection, marching against me at the head of all the troops of the world – in the tragic vanguard of all the world’s armed men.”― Fernando Pessoa

“I still remember—so vividly I can smell the gentle fragrance of the spring air—the afternoon when I decided, after thinking everything over, to abdicate from love as from an insoluble problem. it was in May, a May that was softly summery, with the flowers around my estate already in full bloom, their colors fading as the sun made its slow descent. Escorted by regrets and self-reproach, I walked among my few trees, I had dined early and was wandering, like a symbol, under the useless shadows and faint rustle of leaves. And suddenly I was overwhelmed by a desire to renounce completely, to withdraw once and for all, and I felt an intense nausea for having had so many desires, so many hopes, with so many outer conditions for attaining them and so much inner impossibility of really wanting to attain them.”― Fernando Pessoa

“Whatever I think or feel inevitably turns into a form of inertia. Thought, which for other people is a compass to guide action, is for me its microscope, making me see whole universes to span where a footstep would have sufficed, as if Zeno’s argument about the impossibility of crossing a given space – which, being infinitely divisible, is therefore infinite – were a strange drug that had intoxicated my psychological self. And feeling, which in other people enters the will like a hand in a glove, or like a fist in the guard of a sword, was always in me another form of thought – futile like a rage that makes us tremble so much we can’t move, or like a panic (the panic, in my case, of feeling too intensely) that freezes the frightened man in his tracks, when his fright should make him flee.”― Fernando Pessoa

“Teach nothing, for you still have everything to learn.”― Fernando Pessoa

“Think like spiritualists, act like materialists. The doctrine is not absurd: it is, after all, the spontaneous doctrine of all humanity.”― Fernando Pessoa

“The deepest and deadliest drought of centuries has descended upon us – that of the intimate knowledge of the emptiness of all efforts and the vanity of all purposes.”― Fernando Pessoa