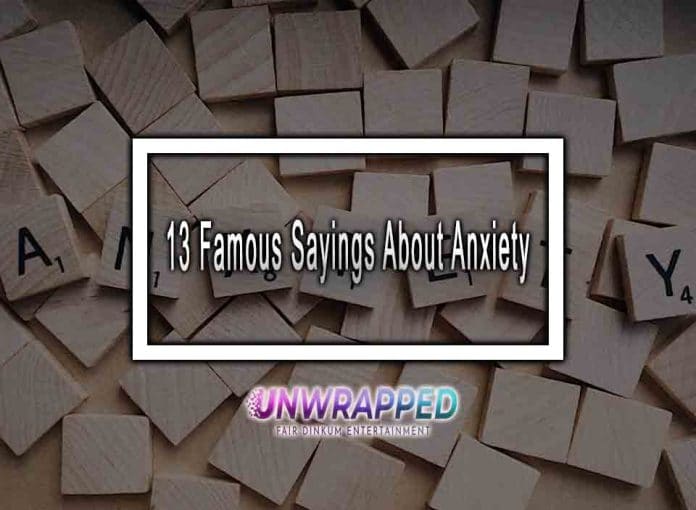 Here are my favorite 13 quotes or sayings about Anxiety be sure to comment at the end with your favorite:

“Imagine smiling after a slap in the face. Then think of doing it twenty-four hours a day.”

“What upsets people is not things themselves, but their judgements about these things.” — Epictetus.

“There is only one way to happiness and that is to cease worrying about things which are beyond the power of our will.” — Seneca.

“It is impossible that happiness, and yearning for what is not present, should ever be united.” — Epictetus.

“If a person doesn’t know to which port they sail, no wind is favourable.” — Seneca.

“Today I escaped anxiety. Or no, I discarded it, because it was within me, in my own perceptions — not outside.” — Marcus Aurelius.

“Does what’s happened keep you from acting with justice, generosity, self-control, sanity, prudence, honesty, humility, straightforwardness, and all other qualities that allow a person’s nature to fulfil itself? So remember this principle when something threatens to cause you pain: the thing itself was no misfortune at all; to endure it and prevail is great good fortune.” — Marcus Aurelius.

“Were you to live three thousand years, or even thirty thousand, remember that the sole life which a man can lose is that which he is living at the moment…he can have no other life than the one he loses. For the passing minute is every man’s equal possession, but what has once gone by is not ours.” — Marcus Aurelius.

“What is the point of dragging up sufferings that are over, of being miserable now, because you were miserable then?” Seneca.

“Many of the anxieties that harass you are superfluous… Expand into an ampler region, letting your thought sweep over the entire universe.” — Marcus Aurelius.

“True happiness is to enjoy the present, without anxious dependence upon the future, not to amuse ourselves with either hopes or fears but to rest satisfied with what we have, which is sufficient, for he that is so wants nothing.” — Seneca.

“Set aside a certain number of days during which you shall be content with the scantiest and cheapest fare, with coarse and rough dress, saying to yourself the while, ‘Is this the condition that I feared?” — Seneca.