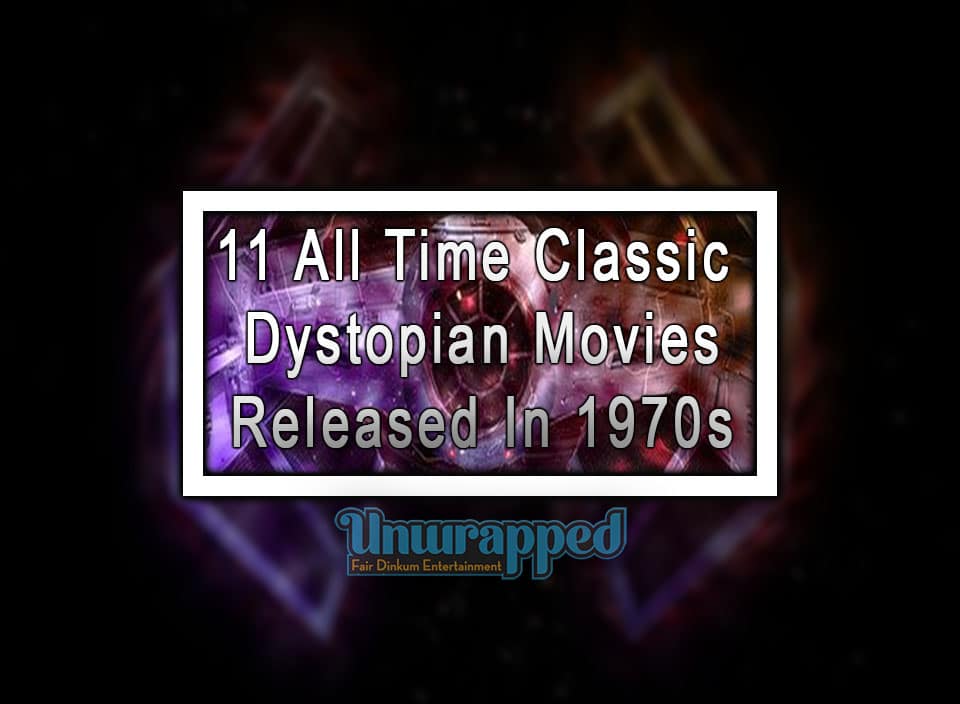 Greatest Dystopian Movies That Came Out in The 1970s

The 1970s was a decade of endless socio-political battles reflected in film, theatre, music, and other forms of art. This daunting period in the film industry revolutionised how filmmakers do their craft, as well as how audiences choose their films. It paved the way to several crucial changes in film that will transform all genres – including dystopian.

Here are some 70s dystopian titles you can check out on your next binge-watch.

Based on Anthony Burgess’s novel of the same name, A Clockwork Orange details the life of Alex, a notorious gang member whose life centres around violence and crime. He later becomes a subject of aversion therapy to cure him of his delinquent nature.

Disturbing and outrageously violent, the film is certainly not for the light-hearted. The film is an eye-opening tale about juvenile delinquency, crime, and a deranged society.

Stanley Kubrick serves as the film’s director, screenwriter, and producer. This classic novel adaptation constantly stays true to its material throughout the film. With exquisite music, superb directing, and cinematography, it’s a must-see 70s film.

A Boy and His Dog

Set in nuclear aftermath, the film details the story of a fifteen-year-old boy, Vic, and his telepathic dog. Born in a wasteland without any parental figure, Vic grows up without morals and values. He and his dog navigate their way into a post-apocalyptic world with the help of crime.

L.Q. Jones creates a solid cult-classic in this film. It grapples with issues of morality, technological advancement, and the aftermath of war. Although without its flaws, the film provides a unique and engrossing narrative.

It’s without a doubt that A Boy And His Dog set the tone for future dystopian films. With its stunning special effects and its pleasantly odd story, the film is one of the best in its genre.

The world’s entire population is almost wiped out after a devastating war. Henry fathers a creature who’s almost but not entirely human and must deal when the baby’s mother suddenly leaves.

This David Lynch’s nightmare of a masterpiece deals with fatherhood, industrialism, and social anxiety. It’s profoundly dark and disturbing all the while having substance. Rawness and boldness are what set this film apart from other films of the genre.

Hauntingly freaky and impeccably captured, Eraserhead is one of the most horrifying dystopian films ever made. It’s a surreal and intriguing film that immerses its audience into a grim world that no other film has ever done before.

The Man Who Fell To Earth

This sci-fi film from Nicolas Roeg tells the story of an alien who disguises himself as a human on Earth to acquire water to bring back to his dying planet. He successfully creates a tech company to build a spacecraft that will bring him home but unaware of Earth’s covetous nature.

Working on an impeccable script and stunning visuals, The Man Who Fell To Earth comes out as an iconic film of its decade. It gives an audience a chance to look at the world through an alien’s eyes.

No Blade Of Grass

John Custance and his family must flee London to go to Scotland when a mysterious virus leaves the Earth to descend into famine and havoc. While they flee, they encounter unforeseen obstacles along the way.

In this film by Cornel Wilde, the audience is taken along for an environmental sci-fi voyage with a crowd-pleasing conclusion. It doesn’t shy away from tackling morality and ethics along the way, leaving its audience in contemplation.

Adapted from John Christopher’s The Death of Grass, the film is obtuse yet sufficiently thought-provoking and entertaining. It’s an overall worthwhile post-apocalyptic viewing experience.

Based on the short story “Rollerball Murder”, the film details an extremely violent sport called Rollerball. A civilized society led by corporations has calmed most of the world’s violence but it later resurfaces as a form of sports. A hall-of-famer will soon challenge the society that once hailed him as a champion.

Producer and director Norman Jewison builds a compelling futuristic world with strong characters and engrossing plot. Mounted on a realistic yet convincing premise, the film delivers a satisfying dystopian world.

Rollerball gives its audience a closer look at corporate greed and control through its action-packed and fast-paced storyline. It’s a profound and edgy take on how society can easily be controlled and manipulated.

When all plants on Earth become extinct, the ecosystem depends on greenhouse pods connected to spacecraft. Freeman Lowell is a botanist dedicated to preserving what’s remaining of the Earth’s flora. He must give all he’s got to save the greenhouses when his colleagues receive orders to destroy them.

This environmentally-themed film is packed with an ambitious premise that creates for a toilsome and solitary journey. It effectively tackles morals and ethics within its imaginative and fertile plot.

Douglas Trumbull manages to craft a visually appealing and substantial film in Silent Running.  It’s an engaging and engrossingly adventurous film for fans of the sci-fi and dystopian genre.

Based on a Harry Harrison novel, the film begins with a fictional 2022 wherein overpopulation and pollution have drastically taken a toll on people’s resources. Frank Thorn must investigate the murder of Soylent Industries’s owner – the leading manufacturer of the earth’s food supply.

Horrifying and gut-wrenching mysteries are unveiled throughout the film. Although fictional and speculative, Soylent Green successfully reaches its audience through its powerful narrative and solid acting.

THX 1138 revolves around a futuristic dystopian society wherein drugs are being used to control people’s emotions and the world is tightly controlled by androids. THX 1138 battles with his emotions and individuality and soon rebels against the society that once swore to protect its citizens.

Modestly acted and well crafted, the film stands out as a creative and entertaining commentary on totalitarianism and conformity. Taking advantage of solid special effects, it’s an overall amusing cinematic experience.

In George Lucas’s directorial debut, he creates a hypnotic and one-of-a-kind film that’s worthwhile even for non-Star Wars fans.

Westworld follows a fictional futuristic 1980s where androids are placed in amusement parks. The plot thickens when a malfunction occurs, a robot wreaks havoc among its rich vacationers.

In this amusement park gone-wrong sequence, this pixellated adventure thriller sets its audience for a joyride. Dabbling on issues of free will and rebellion, the film rises above to be one of the most critically acclaimed films of the decade.

Director Michael Crichton directs a sophisticated and gripping film in Westworld. Intelligent and enjoyably futuristic, it’s a worthwhile one and a half minutes of your life.

This dystopian science fiction film revolves around a seemingly utopian society that kills its citizens when they reach thirty years old – all in the claims of equally distributing the world’s resources. A group of people must flee for their lives in the hopes of finding a sanctuary and living out the rest of their lives.

With an eye-catching premise, the film features decent performances from its leads – making for an overall enjoyable experience. Hedonistic and foolish at times, the film manages to sustain its thrills.

Michael Anderson concocts a perfect blend of action, drama, and science fiction in Logan’s Run. This futuristic film starts as sluggish but later on propels itself, much to the audience delight.

For The Latest Price To Buy/Rent:

The 70s has produced some of the most acclaimed dystopian films of all time. These films often depict a fictional society that’s gone terribly wrong. While most films rely on exaggerated science fiction that makes it hard to conceive its plausibility, the films certainly reach out to their audiences on a much deeper level. Not just relying on realistic elements, but on compelling message and truths.

The Future You Wrote: Dystopian Books That Were Big Screen Hits