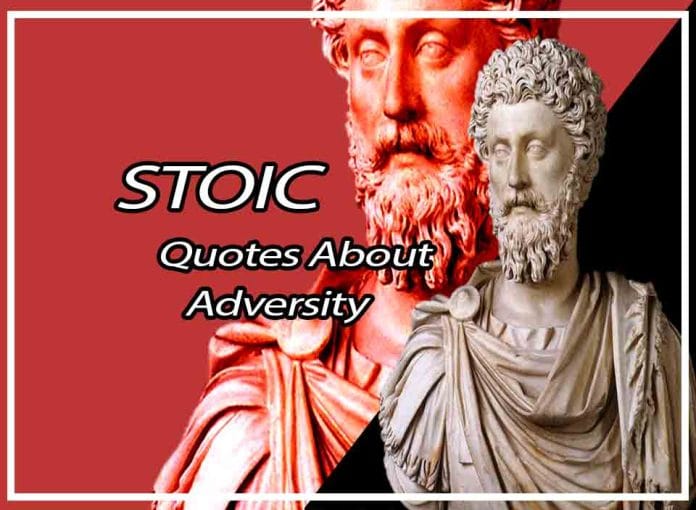 Best Quotes on Adversity from Stoicism

As a practicing Stoic, I have used many quotes on Adversity to help me, inspire me, or keep me sane. I hope you find some gain and drive in some of Stoicism’s finest quotes on Adversity. Developing peace of mind through confidence in one’s abilities is what Stoicism is all about and knowing that this is ancient wisdom, along with applications by modern great, you know the Stoic beliefs stand up.

” Just as nature takes every obstacle, every impediment, and works around it — turns it to its purposes, incorporates it into itself — so, too, a rational being can turn each setback into raw material and use it to achieve its goal.”

” Let us too overcome all things, with our reward consisting not in any wreath or garland, not in trumpet-calls for silence for the ceremonial proclamation of our name, but in moral worth, in strength of spirit, in a peace that is won forever once in any contest fortune has been utterly defeated.”
– Seneca, Letters from a Stoic

” Look around you at all the throng of those you know and those you do not, you will find everywhere men whose sufferings have been greater; legend has not granted exemption from misfortune even to the gods.”

” Others have been plundered, indiscriminately, set upon, betrayed, beaten up, attacked with poison or with calumny — mention anything you like, it has happened to plenty of people.

” On the occasion of every accident (event) that befalls you, remember to turn to yourself and inquire what power you have for turning it to use… If it be abusive words, you will find it to be patience. And if you have been thus formed to the (proper) habit, the appearances will not carry you along with them.”

-Seneca, Letters from a Stoic

” Remember: you shouldn’t be surprised that a fig tree produces figs, nor the world what it produces. A good doctor isn’t surprised when his patients have fevers, or a helmsman when the wind blows against him.

” The foolishness of people who are surprised by anything that happens. Like travellers amazed at foreign customs.

– Seneca, On the Tranquillity of the Mind

” Evil: the same old thing. No matter what happens, keep this in mind: It’s the same old thing, from one end of the world to the other. It fills the history books, ancient and modern, and the cities, and the houses too. Nothing new at all.

Stoic Quotes on Adversity the Best Quotes From the Stoics

I hope these Adversity quotes helped you. Please comment below and share the best Stoic quotes that have benefited you when facing Adversity.

Stay Connected
52,608FansLike
5,674FollowersFollow
831FollowersFollow
Previous article
How I Convinced My Brain to Enjoy Difficult Tasks (dopamine detox)
Next article
15 Meaningful Stoic Quotes About Death That Will Change Your Life