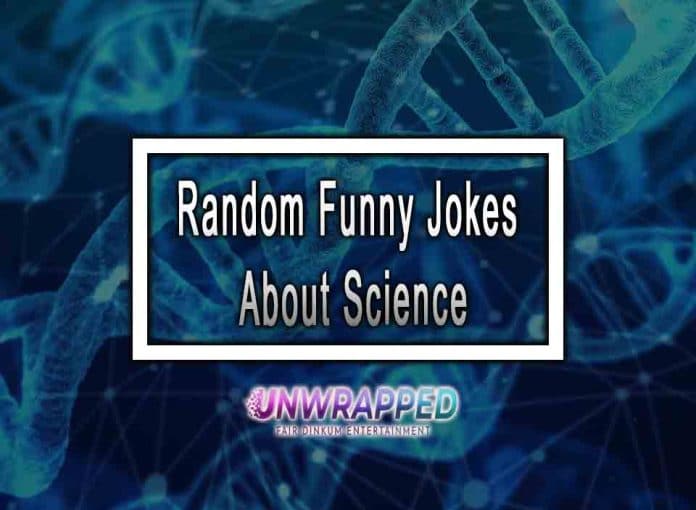 Ready for a laugh? I have collected from around the internet some of the funniest random jokes on Science. See below 10 side spitting (or not) jokes on science.

“Parallel lines have got so much in common.
It’s a shame they’ll never meet.”

My physics teacher told me I had a lot of potential. Then he pushed me off a roof.

“There’s incredible chemistry between me and my wife right now.
She’s currently dissolving in an oil drum filled with hydrochloric acid.”

“Following on from the discovery that it’s possible to go faster than the speed of light, scientists today found a temperature lower than Absolute Zero.
It was observed in a sausage roll from Greggs”

The guy who split the atom is probably thrilled that we use ‘sliced bread’ as our measure of greatness.

“Today during a Physics lesson I tried my best to figure out why a Black Hole is so called.
All until my mate pointed out that they steal light and matter.
Then I understood.”

“Not many people knew that Albert Einstein had a brother that an evil scientist used to experiment on.
His name was Frank Einstein”

“I’ve just bought a new fridge that chills to absolute zero.
How cool is that?”

“So they have found a new particle that travels faster than light now?
We certainly didn’t see that one coming.”

“A biologist and a physicist got married but soon had to divorce.
There was just no chemistry.”