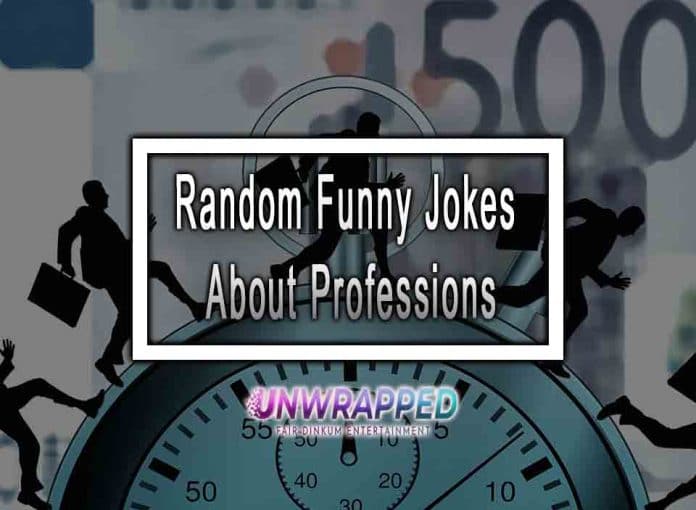 Ready for a laugh? I have collected from around the internet some of the funniest random jokes on Professions. See below 10 side spitting (or not) jokes on professions.

“A woman walks into the doctor’s surgery but doesn’t like the way he’s looking at her.
When he tells her to undress, she asks him to turn out the lights before she disrobes. After he turns out the lights she asks, “”Where will I put my clothes?””
“”Hang them up over here,”” he says, “”next to mine.”””

“My daughter was running a temperature so I rang the doctor. He asked was she hot.
I said, “”Well, with a little make-up…”””

“When I was little, we used to play a game called “”knock and run”” where you knock on someone’s door and run away before they answered.
Nowadays, it’s known as “”Parcelforce“””

“Patient: “”Doctor, doctor! I feel like a pair of curtains!””
Doctor: “”That’s the least of your problems… You have AIDS.”””

“If you’re being chased by a police dog, try not to go through a tunnel, then onto a little seesaw and then jump through a hoop of fire.
They’re trained for that.”

Whenever I feel ill enough to make a doctor’s appointment, I strangely hope that I stay sick until I see the doctor.

“If you ever get arrested wait till the cop says “”anything you say will be taken down and used in evidence against you””
Then you say this: “”please don’t hit me again officer.”””

“The three most heart-warming words somebody can say to you:
Lack of evidence.”

“A man and a friend are playing golf one day at their local golf course.
One of the guys is about to chip onto the green when he sees a long funeral procession on the road next to the course. He stops in mid-swing, takes off his golf cap, closes his eyes, and bows down in prayer.
His friend says: “”Wow, that is the most thoughtful and touching thing I have ever seen. You truly are a kind man.””
The man then replies: “”Yeah, well we were married 35 years.”””