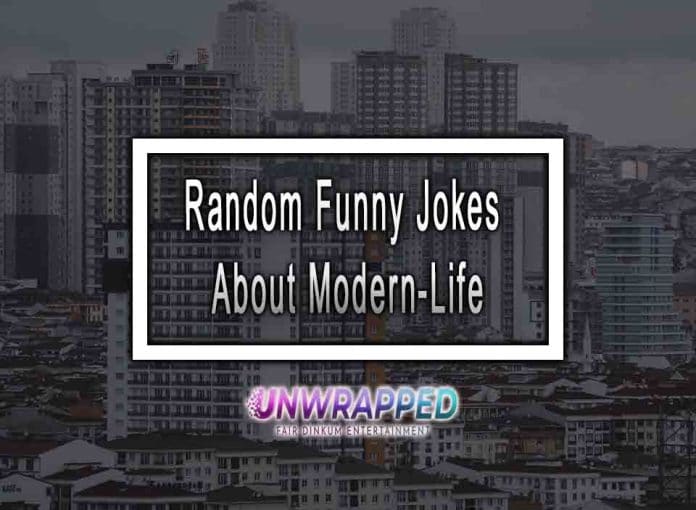 Ready for a laugh? I have collected from around the internet some of the funniest random jokes on Modern-Life. See below 10 side spitting (or not) jokes on modern-life.

“My girlfriend has just texted both our names to 58888 and she says we’re only 78% compatible.
I said, “”Hang on. You’ve just paid 3.50 to be sent a random percentage, …and you still think we are in any way compatible?”””

My bank is the worst. They’re charging me money for not having enough money in my account. Apparently, I can’t even afford to be broke.

“My girlfriend recently asked how much I love her.
“”I love you more than my mum!””
Joke’s on her though, because my mum doesn’t love her at all.”

“With a slight hesitation, I nervously inserted a finger: it felt warm and wet. She groaned.
“”I’m gonna need more than that,”” she said.
Taking a breath, I then inserted three more fingers. Her eyes widened.
“”Go on, put your whole hand in,”” she demanded.
I wanted to please her, so I did what she said: I was really sweating by now but she was getting more and more excited.
“”It’s no good, you’re gonna have to put your other hand in as well”” she shouted.
I closed my eyes and thrust forward with my other hand and she let out a scream.
“”There you go Dave, it’s not that hard to do the washing up is it?”” she smiled.”

“I bought a new toy for my son yesterday. It’s a kind of puzzle that has apparently been designed by psychologists to prepare children for the harsh reality of modern life.
No matter how you put it together, it’s wrong.”

“My granny told me what it used to be like at the seaside. “”There was a laughing sailor machine. You put your money in and you didn’t win anything or get a refund, it just laughed at you. There’s nothing like that these days.””
I said, “”Yes there is – it’s called the lottery.”””

“Just been watching Time Team and they found a piece of pot two thousand years old.
Amazing, I can’t get mine to last the weekend.”

“There are many bad things that can happen to us in our lives.
We lose people close to us.
We lose our jobs.
We get cheated on by the people we love.
We experience many different feelings in our life times.
But we just get on with it.
The worst feeling imaginable, Is that moment when your index finger pokes through a thin piece of bog roll, mid-wipe.”