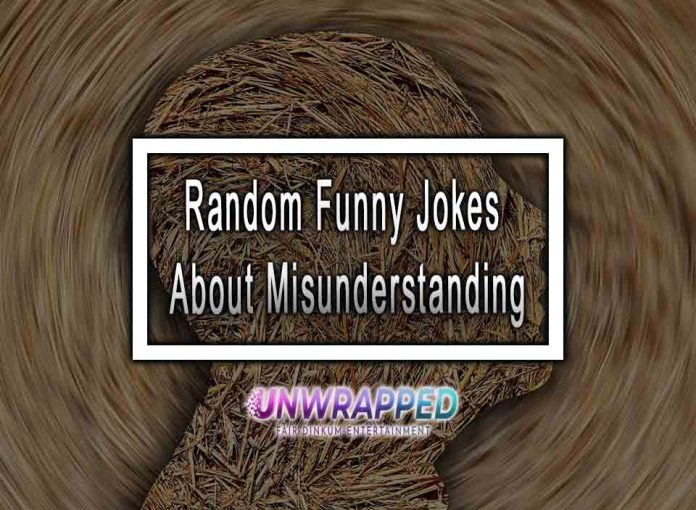 Ready for a laugh? I have collected from around the internet some of the funniest random jokes on Misunderstanding. See below 10 side spitting (or not) jokes on misunderstanding.

“I saw a man at the beach yelling “”Help, shark! Help!””
I just laughed, I knew that shark wasn’t going to help him.”

“I took a bird and her baby for a picnic on a cliff.
I was trying to slip my hand in her knickers when she stopped me and said, “”No, not until the baby drops off.””
So I kicked him over the edge.
The look on her face suggested that’s not what she meant.”

“Last year my wife was furious that I missed her birthday, and insisted that in future I should plan at least two months in advance.
Well it’s her birthday in 8 weeks time, and I’m pleased to say I’ve already bought her her present.
She’s going to love these flowers.”

“A dying granny tells her granddaughter, “”I want to leave you my farm. That includes the villa, the tractor and other equipment, the farmhouse and 22,398,750.78 in cash.””
The granddaughter, about to be rich, says, “”Oh my, granny, you are so generous. I didn’t even know you had a farm. Where is it?””
With her last breath, her granny whispered, “”Facebook…..”””

“My next door neighbor told me to stop following her around everywhere or she’d call the police.
“”You wouldn’t do that, would you?”” I asked.
“”Watch me,”” she replied.
“”No. You said you’d call the police.”””

“I was lying on the couch watching TV earlier, when my 10 year old boy came up to me and said, “”Dad! I really want to do the father-son sports day at school tomorrow.””
I laughed at him and said, “”Aww Matthew that’s so sweet. But you don’t have a son.”””