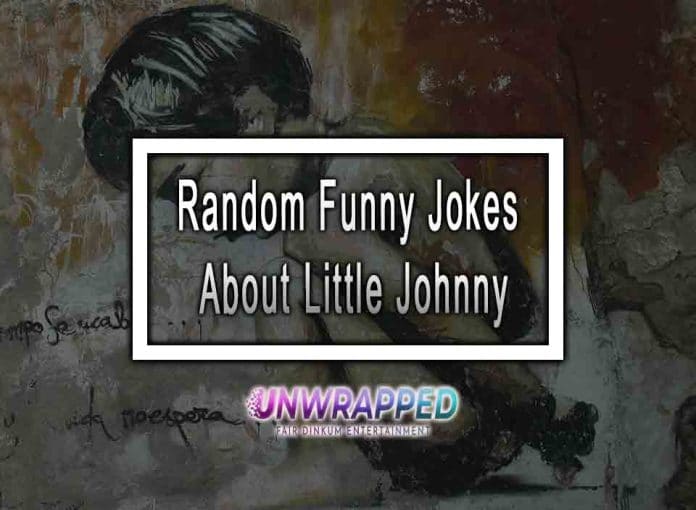 Ready for a laugh? I have collected from around the internet some of the funniest random jokes on Little Johnny. See below 10 side spitting (or not) jokes on little Johnny.

While in the playground with his friend, Little Johnny noticed that Jimmy was wearing a brand new, shiny watch. “Did you get that for your birthday?” asked Little Johnny. “Nope.” replied Jimmy. “Well, did you get it for Christmas then?”. Again Jimmy says “Nope.” “You didn’t steal it, did you?” asks Little Johnny. “No,” said Jimmy. “I went into Mom and Dad’s bedroom the other night when they were ‘doing the nasty’. Dad gave me his watch to get rid of me.

“Little Johnny was asked by his teacher what book he would read if he was abandoned on a deserted island.
He thought for a moment and then replied, “”Boat Building.”””

“A little boy and girl at school were having lunch in the shelter shed.
“”Tommy,”” she said, “”I’m not eating any more chicken sandwiches.””
“”Why?”” he asked.
“”‘Cause I’m starting to grow feathers down here,”” she said, pointing to the bottom of her tummy.
“”I don’t believe you,”” he said. “”You’ll have to show me.””
Behind the shed they went, where the inspection took place.
“”You’re right,”” he said. “”I’ve been eating a lot of chicken also. Perhaps I’m getting feathers too.””
“”Well, I’d better have a look,”” she said.
After a lengthy examination, she looked up and said, “”Oh, I think it’s too late for you. You’ve got the neck and giblets too.”””

“One day, Little Johnny asks his mother “”Why are some of your hairs white?””
She replies “”Every time you do something that upsets me, one of my strands of hair goes white.””
He nods, then asks “”Grandma is your mother, isn’t she?””
“”That’s right.””
He thinks for a moment, then asks “”So how come ALL of her hair is white?”””

“Little Johnny comes home from his first day at school. His Mother asks, “”What did you learn today?””
He replies, “”Not enough. I have to go back tomorrow.”””

“Little Johnny boasted he could make any woman wet just by wiggling his index finger at her!
“”prove it”” I said
So he pulled out his water pistol…”

“No more little Johnny jokes.
He grew up and died a long time ago.”