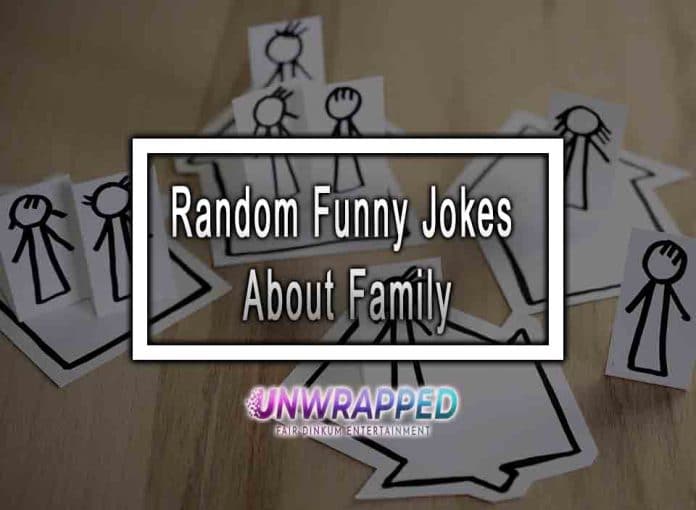 Ready for a laugh? I have collected from around the internet some of the funniest random jokes on Family. See below 10 side spitting (or not) jokes on family.

“I’m going to take a picture of my firstborn and use age progression software to figure out what he’ll look like when he’s 16.
Then I’m going to frame the picture and keep it as a centerpiece in our house,
something he’ll grow up looking at.
Then when the appropriate time comes,
he will realize that the picture is actually of him,
Then I am going to try and convince him that he is a time traveler.”

“On the sofa with my wife last night:
Me: Honey, you remind me of an onion.
Wife: Because I have so many layers to my personality?
Me: No…
Wife: Oh, OK, something stupid like you’ll cry when you slice me up?
Me: No…
Wife: OK, OK, you’d prefer it if I was battered?
Me: No…
Wife: You either love me or hate me? I’m good in small doses? I can be overpowering?…
Me: No…
Wife: Oh, alright, why then?
Me: You smell of onion.”

“My daughter accused me of being a bad father. I don’t know how she can say that…
…she’s hardly ever met me.”

“When a man holds a car door open for his wife…
…it’s either a new car or a new wife.”

“My Grandad always said, “”Don’t watch your money; watch your health.”” So one day, while I was watching my health, someone stole my money.
It was my Grandad.”

“When my older brother and I were little we were always playing Robin Hood. Only thing was, he was always Robin Hood and I had to be Little John.
After a while I got sick of this and told him I wasn’t playing any more.
“”Ok”” he said. “”We’ll play a different game and you can be Robin.””
“”Brilliant”” I said. “”Who are you gonna be?””
“”Batman”” he said.”

“I hate it when couples have a little argument and the girlfriend changes her Facebook status to ‘single’.
I mean, I have arguments with my parents all the time, you don’t see me changing my status to ‘orphan’.”

“Why do men fart more than women?
Because women won’t shut up long enough to build up the pressure.”

“It was the first day of school and the teacher was asking the little boy about his family.
“”And what does your Daddy do?””
“”He’s a magician.””
“”That must be exciting”” What tricks can he do?””
“”He can saw people in half.””
“”That is clever. And, tell me, do you have any brothers or sisters?””
“”Yes, one half-brother and two-half sisters.”””