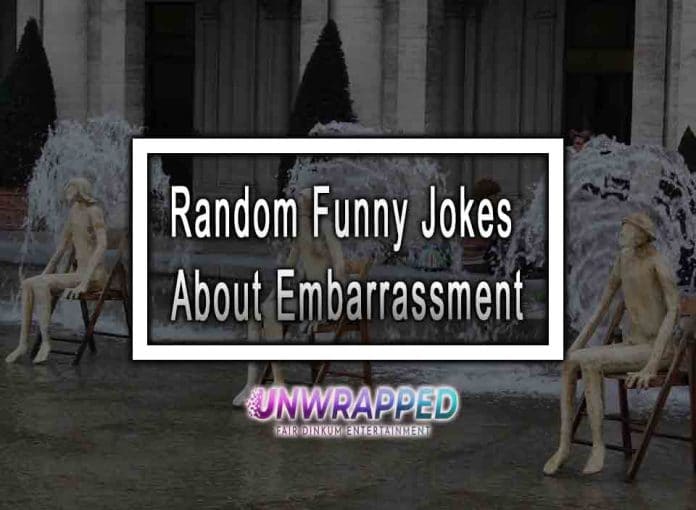 Ready for a laugh? I have collected from around the internet some of the funniest random jokes on Embarrassment. See below 10 side spitting (or not) jokes on embarrassment.

“I came home last night to find my son had thrown a party. The place was trashed.
There was only one punishment that would be sufficient.
So I fingered his mother while we slow danced in the front room.”

“Last night I tried one of those tricks where you light your farts on fire. I couldn’t find a lighter, so I used a candle.
Completely ruined my Grandmothers birthday cake.”

“I should run for political office just to see what kind of scandalous dirt they dig up.
It would be nice to be able to piece together my twenties.”

“I was talking to my mum, ”What about that pretty girl of yours?” she asks.
”Who, Amber? I said.
”Yeah, I’ve been hearing a lot of noise coming from upstairs lately.” she said smiling.
”We broke up a 2 weeks ago mum.” I said.
”I know!” she said laughing, ”You’ve been in your room crying for days you big girl!””

“I saw this hot girl walking towards me, so I tried to impress her and stood next to this really expensive Ferrari.
As she came closer to me….she said, “”Excuse me”” and got in her car and left.”

“I should be proud of my wife for being an elite athlete.
I just find it difficult to tell others I’m married to the scrum-half from Leeds Carnegie.”

My girlfriend and midwife didn’t see the funny side to me wearing my t-shirt with the logo ” remember my name you’ll be screaming it later” when she went into labor.

“I saw an old mate I hadn’t seen for ages. “”How’s life in the fast lane?”” I joshed.
“”Not too good mate. My wife was involved in a multiple pile up on the motorway.””
Hush, my mouth.”