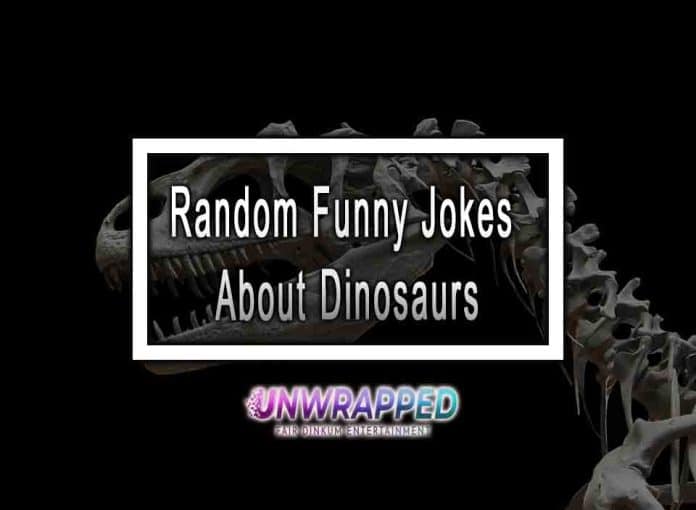 Ready for a laugh? I have collected from around the internet some of the funniest random jokes on Dinosaurs. See below 10 side spitting (or not) jokes on dinosaurs.

“I don’t understand why scientists say that the dinosaurs died because a meteor hit the earth.
Everyone knows it’s because Noah couldn’t fit them on the arc.”

“T-Rexes may have lacked intelligence but they never gave anything away.
They always kept their cards close to their chest.”

Fossils- the only thing they tell us is that dinosaurs lived underground.

“My parents tried to put me off becoming an archaeologist.
They said there was no future in it.”

“God is definitely a woman.
If God was a man, he’d never have cancelled the dinosaur programme.”

“Being a big fan of Mark Bolan I have to say I was a little disappointed in the T-Rex t-shirt I ordered off of Ebay.
It was a little short in the arms and a few hundred sizes too big.”

“Evolution is at work the whole time, creating new and complex eco systems, everyone a microcosm of the universe, forever changing forever developing.
That’s why I can’t clean my room!”

“I imagine that if you were to cut open an archaeopteryx, it’s stomach would be full of worms.
After all, it was the earliest bird.”

“Why did the dinosaur cross the road?
Because chickens didn’t exist in those days.”

“How Did The Dinosaurs Die?
Well, after they ate everything on Earth, they dug deep into the ground to search for food.
Sadly, they became trapped in their own holes, which is why their skeletons are found underground today.”