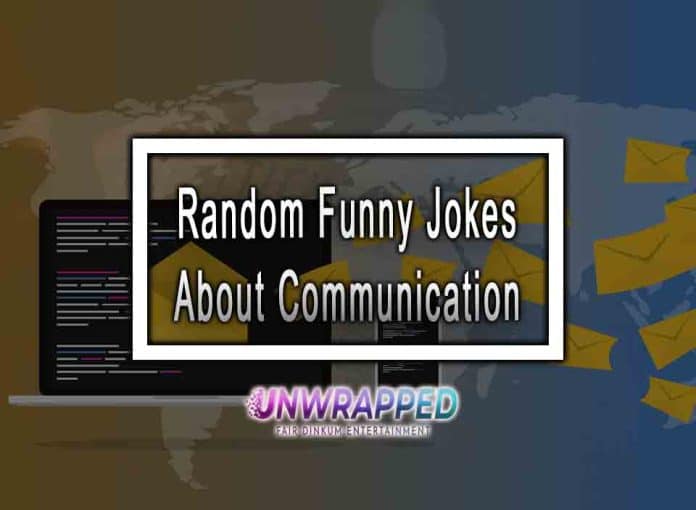 Ready for a laugh? I have collected from around the internet some of the funniest random jokes on Communication. See below 10 side spitting (or not) jokes on communication.

“How do you know if someone has an iPhone?
They tell you.”

“The bank just rang me with regards to my new current account.
I must admit, I wasn’t very impressed with what I heard.
A Paki’s voice.”

“Girl- How much do you love me?
Guy- Well, look at the stars and count them. That’s how much I love you.
Girl- but, its morning.
Guy- Exactly.”

Predictive text is a female invention, because it’s another thing that knows what you’re going to say before you’ve already said it.

“My girlfriend asked me for a new phone, similar to a blackberry or an iPhone.
So I gave her a black-i.”

“What’s the difference between Call of Duty: Black Ops and a restaurant?
A restaurant usually has a good host and servers that work.”

“My mate came up to me and started showing off his new iPhone 4S.
“”Oi mate, can your phone do this?”” He asked, “”Youtube.”” He said, and the iPhone instantly went onto Youtube.
“”No,”” I replied, rolling my eyes.
“”Haha! I’ve just downloaded a new app”” He said gleefully.
My phone vibrated and 100 text messages came through all at once saying, ‘Can your phone do this?’
“”Look mate, I know I’ve got a Nokia 3310, but can your phone do this?””
And with that, I launched it into his face knocking him clean out.”

Remember: “Stop, Drop, and Roll” is not only an effective fire safety technique, but also a memorable way out of a boring conversation.

“I keep getting these annoying texts. You know the ones where they keep sending more and more of them. I finally had enough today and sent STOP to the offending number.
Didn’t work though; just got a reply saying something about missing our wedding day.”