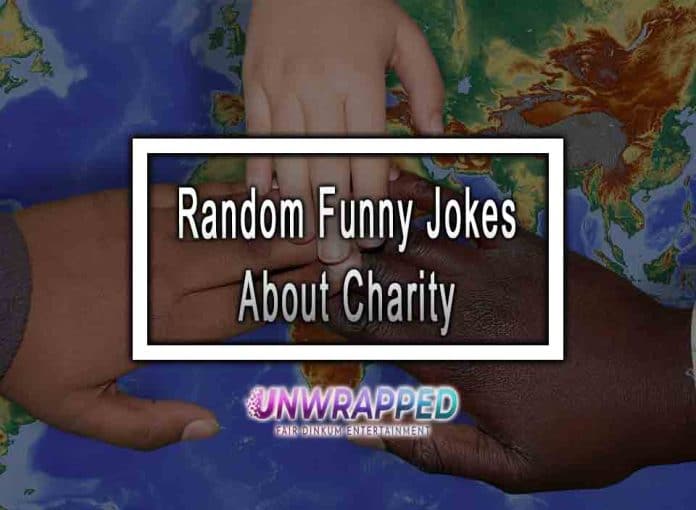 Ready for a laugh? I have collected from around the internet some of the funniest random jokes on Charity. See below 10 side spitting (or not) jokes on charity.

Don’t spend two quid to dry-clean a shirt. Donate it to the Salvation Army instead. They’ll clean it and put it on a hanger. Next morning, buy it back for seventy five pence.

“Have you heard of the ‘Computers for Africa’ charity supplying the poorest regions with computers and laptops to help with education?
It must be nice for them to look forward to getting a virus which isn’t HIV.”

With your help and continued support, from as little as 25 pounds a month, little orphan Mwogli can have 600 minutes and unlimited texts.

“I was flagged down outside Greggs in the town centre today by a hippy chick with beads in her hair, ripped jeans, open-toed sandals and a blue RSPCA polo shirt. She saw me from a good 50 yards away and started waving her clipboard and grinning inanely at me.
I did the obligatory look over my shoulder, look back at her, point at myself whilst mouthing ‘me?’ routine, sighed and headed towards her.
She bounced into the air and landed her face not three inches from mine, close enough to smell the quorn nuggets on her breath.
“”Hiya! Are you OK?! My name’s Casa…””
I held up my finger to her face and gently touched it to her lips, dragging it slowly from one side of her mouth to the other like a stoned metronome. Then without breaking eye contact once, I leant in even closer to her face and said softly,
“”When I was nine, I beat a puppy to death with a spade and threw it onto the roof of my neighbour’s conservatory.””
Then I walked away, but not before screaming “”RARGHH!”” at some nearby pigeons.”

“I had a water fight with a few locals to cool everybody down yesterday.
My bosses at Oxfam aid Relief said that water was for drinking and have pulled me out of Kenya.”

“Do Something Funny For Money!
I dressed up as a priest and stood outside a primary school with a camera…”

Anybody else laugh on children in need , When Cheryl Cole was pleading for money and was talking about how many people run away each year and they showed a disabled child with no feet ?

“Despite the recession Comic Relief raised 57m.
I’d love to see Lenny Henry’s face when my cheque for 55m bounces!
Well worth the 40 quid charge.”

I’ve been paying 2 a month to the Cats Protection League for over a year, I only missed 2 payments and they’ve just been round and broken my cats legs.

“Comic Relief-Do Something Funny For Money.
I pushed a paki in front of a bus then nicked his wallet.”