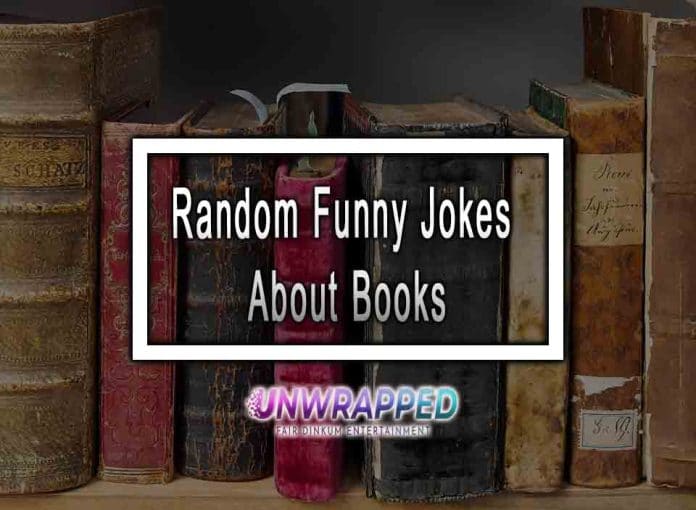 Ready for a laugh? I have collected from around the internet some of the funniest random jokes on Books. See below 10 side spitting (or not) jokes on books.

“I’ve just taken up speed reading. Last night I did war and peace in 20 seconds.
I know it’s only 3 words but it’s a start!”

“I spent almost an hour at the bookstore yesterday signing books.
Which was pretty good, since they caught me after just 25 minutes the last time.”

After being escorted out of Kings Cross station with concussion I’m beginning to think my Hogwarts acceptance letter was a hoax.

Thanks to ’50 Shades of Grey’, my wife’s Kindle now smells like 50 cans of tuna.

I ordered a joke book off Amazon last week…. but I didn’t get it.

“Our new librarian is very polite. I think she is Italian.
I’ve just taken a book back that was months overdue but, rather than charging me, she just said, “”That’s-a-fine.””
So I thanked her and walked out.”

“I walked into Waterstones and asked, “”Do you have any books on ‘How to stop impulse buying’?””
“”Yes we do.””
“”Excellent. I’ll take seventeen copies please.”””

“I found thousands of letters in my postbox today.
That’s the last time I order a dictionary from IKEA.”

Breaking News: Archaeologists digging at the site of Shakespeare’s house have uncovered thousands of monkey skeletons.

“Anyone else think that the Harry Potter series would have been much more entertaining if, after seven books and over a million words, the concluding sentence was:
“”…and that, your honor, is how three children in wizard outfits ended up in my cellar.”””